After the successful EP "Ever Enough?" from 2012 and the nationally and internationally acclaimed debut "Heart over Head" 2014, as well as various sampler contributions, the Italo-Swiss will release his second full-length album after a remix CD in 2016. Produced by G. Mastrogiacomo & Rob Viso in Lucerne (e.g. Rival Kings and Philipp Fankhauser) and mastered by Chris Harms (Lord oft he Lost) & Benjamin Lawrenz in Hamburg.
CONCEPT Kissin’ Black cross genre boundaries
A concept that alternately shows different facets of the colour black. The original compositions are characterized by their free spirit. The songwriting is more varied and mature, the lyrics are more intense and profound. The band's greatest strength is their extremely elegant way of crossing genre boundaries as if they didn't exist at all. Authenticity is maintained at all times. "Dresscode: Black" will therefore find its followers among dark romantic gothics as well as metalheads, rockers and lovers of dark coloured singer and songwriter sounds.
SOUNDS Southern temperament and Swiss mountains
Take a glass of red wine, listen to verses full of poetic beauty and light a candle... and a little later pour a can of petrol into the fire! This is how the music of Kissin' Black can be described. By bringing together seemingly irreconcilable elements, they create a very unmistakable and convincing style: Southern temperament meets the atmosphere of mist covered Swiss mountain landscapes, while the velvety dark to ominous voice of singer Giu Mastrogiacomo gives goose bumps.
Kissin' Black likes to play with clichés, both lyrically and musically. But they are not just dark, even though they always wear black on stage: out of the lyrics and music colors speak again and again. Melancholy, longing, dreams and hope join hands. Melancholy, dreamy ballads, carried only by voice and piano, alternate with driving rock songs in the tradition of W.A.S.P. or INXS, where no foot remains still. 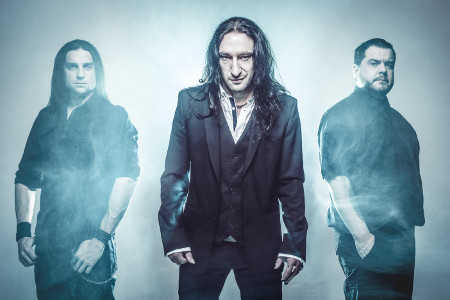