AOP Records sets March  29th as the international release date for Ellende's highly anticipated third album, Lebensnehmer. The album will be released on CD, vinyl LP, and boxset formats, with both the vinyl and boxset editions featuring an exclusive bonus track. And today, the new track "Du wärst eine schöne Leiche" has been revealed HERE at AOP Records' official YouTube channel. Hear Ellende's "Du wärst eine schöne Leiche" in its entirety HERE.
Founded in 2011 by multi-instrumentalist L.G., Ellende has always strived for the melancholy, anger, and beauty that is buried in our mere existence and misanthropy. Deeply rooted in black metal, the project didn’t fear wisely selected instrumentation in order to achieve a unique atmosphere and songwriting style. This mainly includes strings, brass, and other classical instruments, as well as L.G. doing most of the studio work and all artwork and design himself. After the independent release of Rückzug in die Innerlichkeit by L.G. in 2012, Ellende became a live band with session musicians and three releases, and some successful European tours followed.
The attention for Ellende peaked with their second album, Todbringer, in 2017, which was hailed as one of the most outstanding atmospheric/post-black metal albums of the year by many critics and audiences, hitting nearly a half-million views on YouTube in a few months and successively selling out its initial physical pressing.
Patiently taking two years to perfect the songwriting, Ellende's third full-length (and fifth release overall), Lebensnehmer is now finished. Featuring live musician P.F. on drums like on previous records, Lebensnehmer vividly displays all the sturm und drang of the trademark Ellende sound, now more breathtaking than ever. Taking a more adventurous approach to dynamics as well as exhibiting a clarity of focus previously untouched, Lebensnehmer moves like a literal emotional rollercoaster - hitting the highest of highs, and especially the lowest of lows - spellbinding the listener at every skyscraping turn. As ever, the stirring melodicism of L.G. takes center stage, weaving emotive ecstasy even while a torrent of blastbeats from P.F. booms all around here. Elsewhere, suitably splendorous atmosphere is evoked through frequent stretched-out instrumental passages, allowing both drama and tension to wage war within the listener's heart and head. And of course, only the most sterling production standards were sought by L.G, with recording & mixing at Audioriotrecordings Austria and mastering by Iguana Studios Germany.
As the mainman enthuses, "I am truly grateful how this record turned out. As the title already implies, Lebensnehmer - or 'life taker,' in English - has a very strong connotation coming about two years after its sister album Todbringer, which is 'death bringer' in English. Going through rough times, it fills me with a sense of well-being when another selection of music has been made into a full-length result of anger, melancholy, and beauty. Being surrounded by very gifted musicians and sound engineers, you can expect another milestone from Ellende." 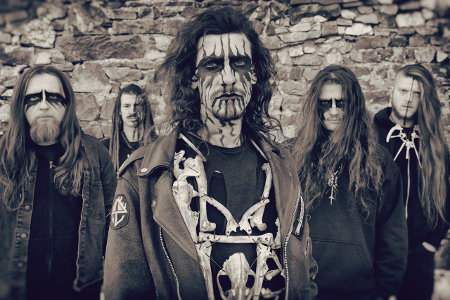 More in this category: « IMPRECATION AERA »