From betwixt the cloven hoof, comes a new offering from Seance Records, Tyrannic's debut album ‘Ethereal Sepulchre’ to be released on the 27th of August.
‘Ethereal Sepulchre’ features four long tracks of heinous, horrific & bizarre sound; the most primitive rumblings straight from the beast’s belly! This is pure, unadulterated metal from a trinity who’s veins pump with the pulse of heavy metal; Like the barbaric grunt of the beast chewing upon traditional Black metal then spewing forth the ‘UGH’ soul of Celtic Frost with a murky bile of down tempo doom and primeval hypnotic drum battery followed by the gnashing of teeth, bristling of fur and strike of tail true to Black metal’s savage, aggressive, obscurity. The bleat of wailing heavy metal power soars above the cacophonous barrage as ‘Ethereal Sepulchre’ traverses influences ranging from classic heavy metal, raging speed metal to Black Sabbath’s lumbering doomful melodies. Then throw in a bit of Mercyful Fate, the balls of Celtic Frost and Sabbat plus the 90’s Black Metal primitivism of Darkthrone, Beherit and Samael’s ‘Worship Him’ to concoct a unique elixir of Death!
Tyrannic formed in 2010 under the antipodean sky of Australia and while they may draw some similarities to their Southern counterparts, Cauldron Black Ram being a three piece with dual drummer / vocalist as well as sharing a similar coalescence of classic metal influences combined with thrash, death and black Tryannic soon crafted their own twisted path with a darker and more sinister mindset. Despite several line up changes over the years  founding member ‘R’ has constantly driven the band forward from behind the kit with his signature vocal style and dedication to the DIY principles and aesthetic of the underground.
Since the band’s inception Tyrannic has spewed forth two ghastly demos, ‘Tyrannic’ (2013), ‘Macabre Festival of Nosophutos’ (2014), a split release with Sluggard (2016) and a live tape, ‘Mummified in Jugon’ (2018).
2018 heralds a new union as Tyrannic joins forces with Seance Records to release their debut album, ‘Ethereal Sepulchre’. ‘R’ describes it as a release which ‘projects complete darkness in the most obscure form’. Experiential death worship drives the lyrical content as an expression of his innermost exploration into abstract thought, madness and insanity. Mundane and ‘safe’ existence is discarded to delve into the darkest recesses of the mind as it contemplates death and therefore its many aspects and possibilities. There is a longing to be released from the world, mentally, through the macabre, as well as ‘R’s’ personal experiences of 'transcendence' away from the world. Lyrically what seems to be a jumble of words and phrases are not mere ramblings but metaphors and abstract thoughts, like the barely comprehended memories of a dream or nightmare, deathly meditations plucked from the air; macabre fascinations, death fetishism and a mind making sense of death in madness and obscurity. ‘R’s’ dark vocal fascinations ebb and flow maniacally with the music. They meander, rise and fall just as the music does with its many aspects as it follows the wild uncharted paths of unpredictable existence and darkness.
Tyrannic has succeeded in creating a dark beast of doom with this unique album that will pique the interest and hearts of true metal maniacs. It is an honest and uncompromising album, crafted with a very personal approach to carving it its own unique and disgusting mould. 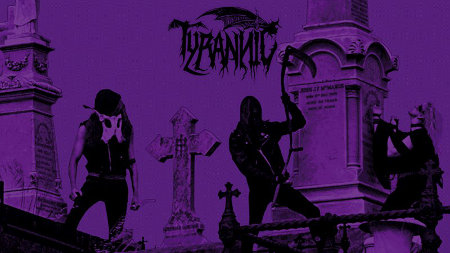