Saber Tiger was founded in 1981 by guitarist Akihito Kinoshita and they have been illuminating the Japanese metal scene ever since. In recent years, they have been more prolific than ever, leading to the international release of Bystander Effect via Sliptrick Records in March, 2018. The album illustrates the broad appeal of Saber Tiger. The riffs are intricate, yet catchy. The songs are heavy, yet melodic. And the vocals of Takenori Shimoyama are raw, but extremely passionate. As a result, the groups heavy metal is classic and timeless while at the same time having the potential to appeal to both traditional metal-heads and fans of contemporary power metal. There are even some progressive influences in their music. The band may have been around for a long time but there is a freshness and commitment to the music that belies their many years and the band certainly sound nothing if not contemporary.
The release of Bystander Effect is not just a simple re-issue for the international market; four of the tracks, originally in Japanese, have been re-recorded with English lyrics, while the brand new acoustic instrumental Ship Of Theseusand a new recording of the Saber Tiger classic First Class Fool are exclusive to the Sliptrick Records release. Also, demo recordings of the spectacular tracks Sin Eater and What I Used To Be are included. There is no better way to get acquainted with Saber Tiger’s unique brand of heavy metal.
Saber Tiger commenced life in the same year as their famous compatriots Loudness and Anthem. Their somewhat remote location on the northern island of Hokkaido and the numerous line-up changes they had to endure in their early years have slowed down the band’s rise a little, but Kinoshita’s “never say die” determination has resulted in a legacy of first class metal. Besides Kinoshita and Shimoyama, Saber Tiger now consist of guitarist Yasuharu Tanaka, drummer Yasuhiro Mizuno and young bass wizard Hibiki, the most recent addition to the band.
In June of 2016, the band played its first two shows on European soil, which finally opened the door to introduce Japan’s best kept metal secret to the rest of the world. In case you missed that, the international release of Bystander Effect is your chance to get to know Saber Tiger.
Bystander Effect [Expanded Edition] | Released March 13th, 2018 on Sliptrick Records. 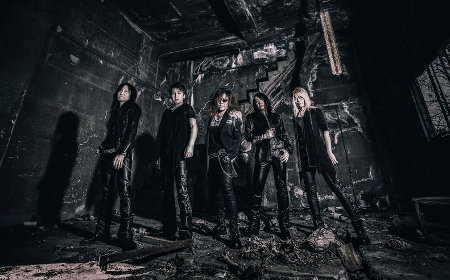