New album "Queen Of Light" out on January 19th!

REXORIA is a female fronted Melodic Metal band with folk influences from Sweden which was formed in 2016.
The quartet spread around the word fast and toured for two weeks in eight countries with Bloodbound, Thobbe Englund (formerSabaton guitarist) and Polish Metal band Crystal Viper, and played 35 shows in total within the first year after it’s founding with bands such as Hardcore Superstar, Raubtier, Electric Boys, Slade, Backyard Babies, ToxicRose, Billion Dollar Babies, Entombed A.D and Smash Into Pieces. 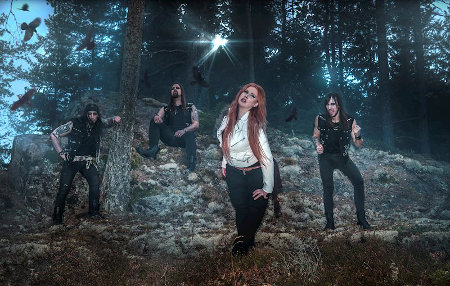 In November 2017, they supported Battle Beast and Dynazty in Sweden.
The vocalist, Frida Ohlin, was nominated in the Swedish competition "Arets rockrost 2016" (The Rock Voice 2016).
The band’s EP’s “Moments Of Insanity” (2016) and “The World Unknown” (2017) are currently available on Spotify. “Queen Of Light” is their first full-length album which will be released on Pride & Joy Music on January 19th, 2018. The CD was recorded in the first half of October 2017 at Trampolin Recordings in Gothenburg, Sweden with producer and mixing engineer Henrik Pettersson and mastered by Jeffro Lackscheide in the USA.

More in this category: « DISAFFECTED NIGHTINGALE »