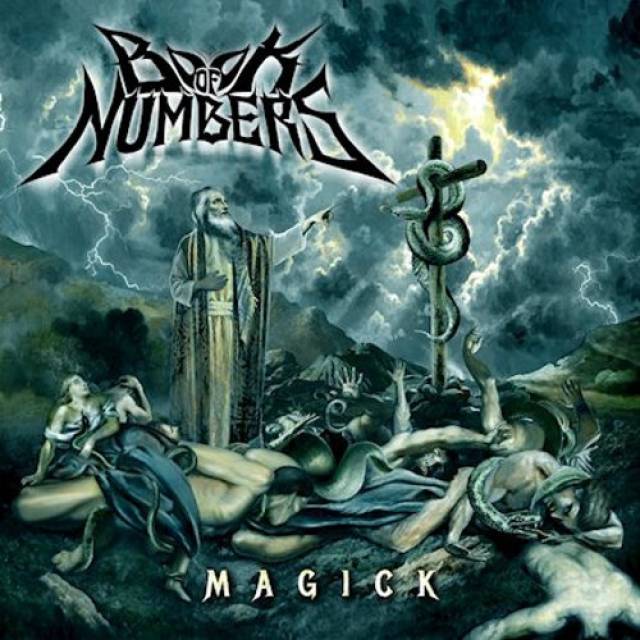 From the heat of the desert southwestern United States comes BOOK OF NUMBERS. The group is a Power Doom Metal band in the vein of Ozzy, Dio, Sabbath, and Rainbow based in Phoenix, Arizona U.S.A.
BOOK OF NUMBERS was founded in June of 2019 by Brent Barker (guitars) and Kevin Schuhmacher (vocals) while rehearsing material for a Black Sabbath tribute band. They decided to join forces to write material with classic doom metal riffs, soaring powerful vocals, and virtuoso guitar solos. They then recruited bassist Dennis Hayes (Iced Earth, Tim “Ripper” Owens). Originally, Dennis was recruited to join the U.S. based Ozzy Osbourne tribute band “I Don’t Know” which Kevin has led for the past 13 years and also features Brent on guitar. However, greater things were meant to be as Kevin and Brent wrote an entire album of original material which became the basis for the band BOOK OF NUMBERS. Phoenix, AZ session drummer Gary Bruzzese recorded the drums but is not an official member of the band.
The vision of BOOK OF NUMBERS is to take the listener on a journey that has elements of classic heavy metal, opera, and movie soundtracks, all tied together with great songwriting and musical performances. Recording sessions for their debut album, “Magick”, took place at several studios in their hometown of Phoenix, Arizona, U.S.A. Initial recording sessions were engineered by local legend and Grammy award winning Clarke Rigsby. Final mixing for the album was completed in Nashville, TN U.S.A by the legendary David Thoener (Rainbow, AC/DC, Aerosmith). Upon reviewing final mixes David commented: “The quality of this band reminds me very much of my work on the album Rainbow Rising” which of course featured the legendary Ritchie Blackmore and Ronnie James Dio. Mastering was completed by Marc Frigo in Nashville, TN U.S.A. “Magick” includes a cover of BLACK SABBATH’s classic “Children Of The Sea”.