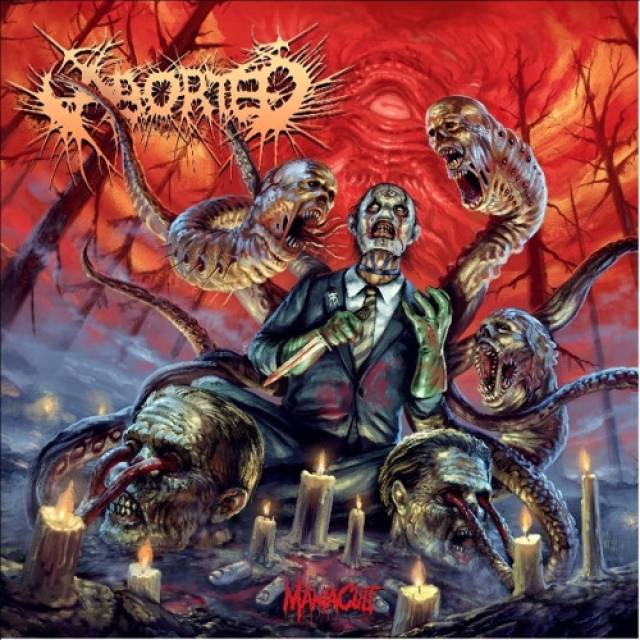 New album “ManiaCult” out on on September 10th!

Join the ManiaCult and you can never leave — at least not with your life intact.
The time has finally come folks! Legendary Death Metal maniacs ABORTED, under the charismatic leadership of Sven Caluwe have returned to take over the earth with their highly anticipated 11th studio album called “ManiaCult”.
Aborted have crafted the perfect soundtrack to this sick sect, which demands human sacrifices to summon Lovecraftian demons. The sinister sound aptly snarls and snakes like the heads that worm their way out from the cult leader’s back.
It’s the same type of authority Aborted have had over the death metal masses for the 26 years since vocalist Sven de Caluwé formed the band in Belgium. As the lone original member, he’s directed the band like a demented conductor: each musician that filters through the ranks a tendril he waves around like a baton.
Aborted are shapeshifters, evolving from blazing deathgrind to groovier fare before settling into a technical approach on death metal. On 11th album ManiaCult, they split the difference between the over-the-top shred of TerrorVision and the dripping dark atmosphere achieved on follow-up La Grande Mascarade. That EP was their first as the current four-piece line-up, rounded out by drummer Ken Bedene, guitarist Ian Jekelis and bassist Stefano Franceschini.
www.aborted.be
www.facebook.com/Abortedofficial

More in this category: « MANIMAL A DYING PLANET »