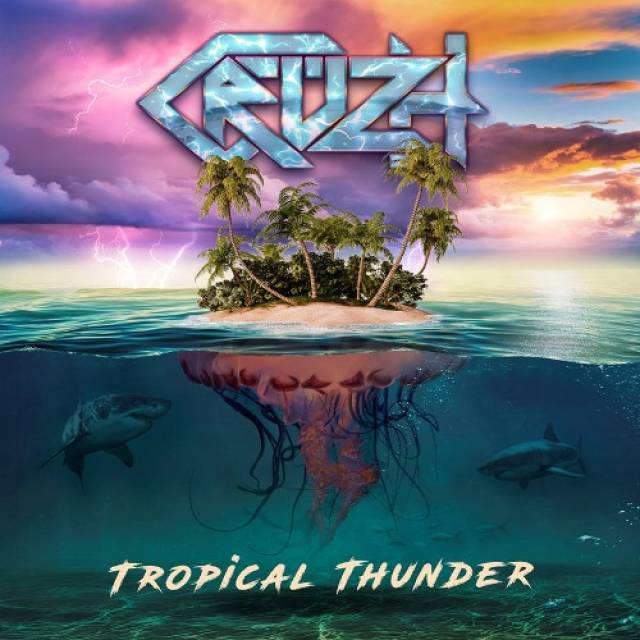 "Overall we wanted more edge, more attitude, simply more rock n’ roll compared to our first album. The songs on ‘Tropical Thunder’ definitely give a more true picture of what Cruzh is all about. We’ve had some time to write new material and get back to our roots since 2016, so I’d say that the writing process went smoothly. I was kind of sceptical though prior to our mixing sessions, which had to be done Covid-safe, which meant that Alex, who lives in the same city as our producer Erik Wiss could attend, but the rest of us had to send mixes and comments back and forth. However, the end result turned out awesome anyway and we made the best of the situation," says guitarist Anton Joensson.
Alex Waghorn was first introduced to Cruzh fans in 2019 with the release of an acoustic version of the song “Aim For The Head”. Now, Waghorn, along with Dennis Butabi Borg, Anton Joensson, and Matt Silver, are at long last ready to unleash the band’s long-awaited second album. Melodic rock fans will not be disappointed with the cavalcade of melodies, hooks, and catchy songs on display on “Tropical Thunder”.
Cruzh was put together in 2013 after the demise of Swedish glam rockers TrashQueen in which both Anton and Butabi played. The band spent their first years releasing some very well-received self-produced demos. “Hard To Get” and its successor, the darker “Aim For The Head,” got great reviews and by late spring of 2015, just when Cruzh was about to release a new EP, they were approached by Frontiers Music Srl who wanted to sign the band to a deal. Cruzh started the album recording process by the end of summer 2015 and their self-titled debut was released in 2016 to rave reviews from the melodic rock community.
After introducing new vocalist Alex Waghorn to the public via an acoustic version of their track ‘Aim For The Head’ in 2019, the band spent 2020 working on their second album, “Tropical Thunder”. Now, in 2021, the long wait for a follow-up album from Cruzh is over.
https://www.facebook.com/cruzhofficial/
https://www.instagram.com/cruzhofficial/

More in this category: « ARNA THE HORNETS »