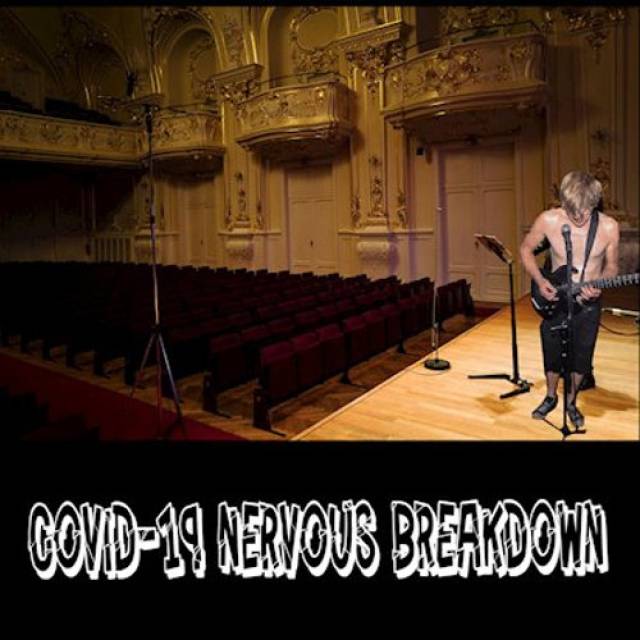 Canadian Punk Legend Murray "The Cretin" Acton of Dayglo Abortions releases debut solo project.
Canadian Punk legend Murray "The Cretin" Acton of Dayglo Abortions releases his debut album - "Covid-19 Nervous Breakdown". Hence the name, this album is a direct result of when you lock down an artist who has spent his life on the road. Spawned from the boredom and frustration That have plagued the last year, this blatantly honest album delves deep into the mind of a caged artist!
Murray adds: "This could also be called 'How I Kept Sane Through the Covid-19 Pandemic While Everything I Do, and Everything That Makes Me Who I Am Was Banned'. I was on tour with The Dayglo Abortions in Western Canada when it all began to unfold, and the lockdowns were imposed the morning after our last show in Vancouver. My first thoughts were..."I've been doing this for 40 years, barely making a living, but loving it nonetheless. If this goes on for long I might as well pack it in." So I went home and even got a job, but the music didn't turn off. This is a selection of songs I wrote while under lockdown in 2020. Since then I started a new dayglo album, and another with my band Stinkhorn, as well as recording and mixing a few bands on the side. I have decided that I can't stop making music, so I might as well share what I make. I hope you enjoy this collection of weird songs as much as I enjoyed making it. Cheers, released April 27, 2021
All music and lyrics by Murray Acton except for Covid-19 Nervous Breakdown, lyrics by Murray Acton, I obviously stole the song from some English band that's been around even longer than me. I hope they can get over it. I played all the instruments in these songs and recorded it into the Reaper DAW. I played the drums on my Roland VDrums when I couldn't find the appropriate beats in a library somewhere, and used a handful of vst synth plugins, as well as the ignite Emissary vst amp simulator for guitar and the ignite SHB for bass. Mixing it was the hardest part. It's way easier to mix other peoples music.
https://murraythecretinacton.bandcamp.com/

Rate this item
(0 votes)
Tweet
More in this category: « CHTHONIC PISTOLS AT DAWN »