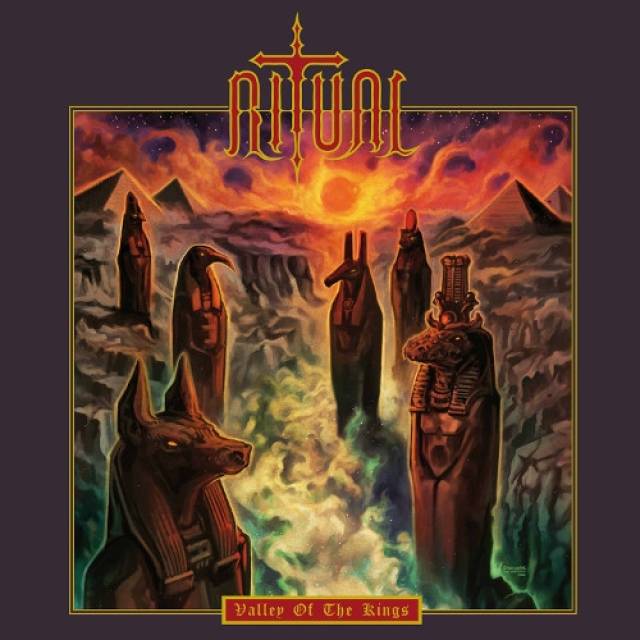 "Valley Of The Kings" re-released on April 30th!

London’s RITUAL came to be known during the period of the New Wave Of British Heavy Metal. The band’s debut album entitled »Widow« was originally issued on Legend Records in 1983.
However, by the time the album was conceived, Re Bethe (guitar, vocals), Phil Mason (bass) and Rex Duval (drums) had already been going for ten years. The band’s very first live appearance took place in September 1973 at "The Café des Artistes" just off Fulham Road in London.
Today, RITUAL (also known as Widow as their groundbreaking debut album did not bear a band logo) are often cited as direct forerunners of the occult rock movement. Re Bethe himself though does not see too many similarities between his band and Black Widow, Atomic Rooster or Coven: "I don't think we ever classed ourselves as an occult rock band. I think we were more of a heavy rock band. But obviously we watched what was happening around us at the time. I think early RITUAL was somehow influenced by Black Sabbath. You know, I wanted to do something that was a cross between Purple and Sabbath. Those were the only two rock bands I ever listened to, really. I think Black Sabbath and Deep Purple had it pretty right."
When Widow released their debut album back in 1983, the legendary New Wave Of British Heavy Metal movement had already reached its peak. “We did see what was going on with other bands,” concludes Re Bethe. “We felt that we were part of something. Widow have often been compared to bands like Samson, Quartz or Pagan Altar. But actually we belonged to the generation of bands which formed directly before the punk years and couldn't get much work all the way through it."
Ten years after »Widow« was released, RITUAL came up with their second album »Valley Of The Kings«, which picked up where they left off in 1983. »Valley Of The Kings« sounds as if it really could (and probably should) have been issued in 1984! RITUAL have a special way of blending hard hitting traditional metal riffs with haunting acoustic passages, making for a unique listening experience.
Although it might look like RITUAL had split up between 1983 and 1993, according to mysterious main man “Gypsy” Re Bethe this was not the case whatsoever: “I think RITUAL has always been a concern. It was always hard work for me trying to find backing for the band. I mean, to be honest with you, it is such a struggle in this country...”

More in this category: « PROUD TUPLE »