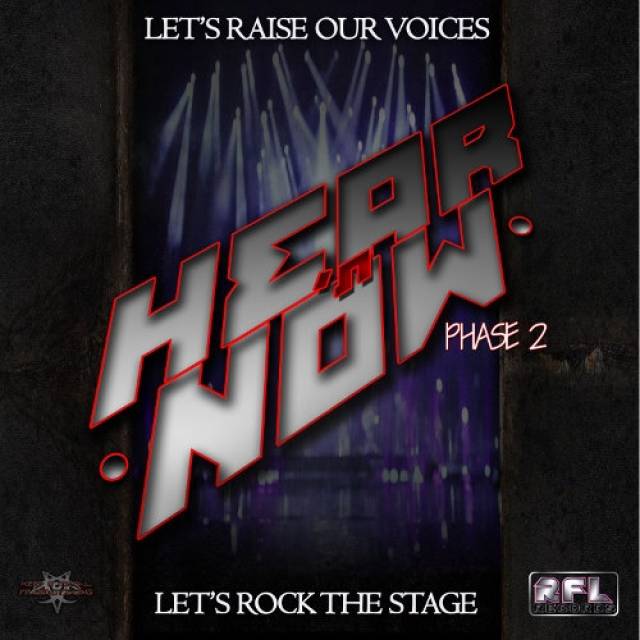 Last year, during the initial lockdown stages of the COVID pandemic, Hear 'N Now - an Artist Initiative was born. The multi-artist coalition was formed in April by Pennsylvania music promoter Billy Loney of Keep it Metal Promotions in an effort to have music create awareness for the growing global crisis. The song, "No Road to Ruin," written, recorded and released to help raise relief funds for those who were initially impacted in the early part of the pandemic, was made available as a free song download and people were encouraged to donate. Monies collected went to the Center for Disaster Philanthropy's Global Recovery Fund.
Artists who participated in that first phase included Steve Grimmett from Grim Reaper, Patrick Kennison from Lita Ford, Chris Natalini of Blood Feast, Ed Mischke from Veronica “The V” Freeman, and the band Corners of Sanctuary (COS) among several others. The song was mastered by producer Bill Metoyer, formerly of Metal Blade Records. All of the artists' time and talents were donated to bring this song to life.
Keep it Metal Promotions is once again putting together a second phase project, in response to the now passed Save Our Stages Act which is part of the COVID-19 Relief Bill. The Federal Act creates aid for many music venues and booking agencies across the United States. A new song titled "Let's Rock the Stage," is currently in production and is slated to release on April 16th via RFL Records (US).
“We all thought and hoped the crisis would have been almost over by now,” said Loney. “With so much to do and so many in need, we felt it necessary to continue the fight. Doing another Hear 'n Now project just made sense.”
Artists currently involved with this latest project include Steve Stine from GuitarZoom.com, Chris Natalini of Blood Feast, Stu "The Hammer" Marshall of Death Dealer, Ed Mischke from Veronica “The V” Freeman, Taryn Dorothy of Starlight, Brian Ozz of Blackened Earth and Corners of Sanctuary.
“Being on stage is in my DNA. Playing for fans on a stage is one of the greatest feelings,” said Blood Feast vocalist Chris Natalini. “So when I was asked to be a part of this amazing collaboration with these other talented artists, all for the same reason, I could not say no…let's rock the stage!"
"Let's Rock the Stage" has been written by guitarist and producer Mick Michaels of Corners of Sanctuary and mixed at Magic Ears Studios in Philadelphia. The track will be once again mastered by producer Bill Metoyer. The single will release exclusively through RFL Records (US) and be available as a digital download.
“Creating music is the ultimate form of expression in my opinion,” said Michaels. “Having the ability to share it with others in a capacity such as this is undeniably a demonstration of each of these artists’ passion and dedication to their craft and to the fans.”
Jon Marchewka (CEO) of RFL Records states: “We are extremely proud to help launch this important initiative. Mick Michaels asked if RFL would want to release this and my answer was a resounding YES. The world needs its music; it’s an outlet that gets us all through the good and bad times and Covid is one of those bad times. Our stages, our venues, are the places where our minds can wonder and be happy for a least a moment in time. It’s our job to keep them alive for generations to enjoy the greatness that is Live Music.”
Additional support is also being provided by March Baby Media, Cosmick Productions, the Vagabond Entertainment Group and Wrecking Ball Metal Fest.
www.facebook.com/HearnNowAnArtistsInitiative