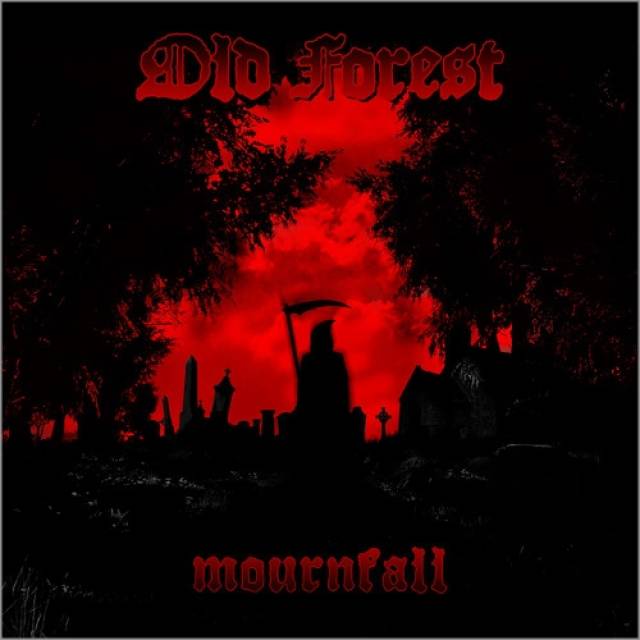 Old Forest return in 2021 with their 6th full-length album Mournfall – the follow-up to 2019's well-received Black Forests of Eternal Doom album' (aside from the debut album reproduction and various vinyl releases).
Mournfall continues the path forged on their last opus by further developing their own individual mix of early 90s style Black Metal with epic Doom riffs. Owing as much to the early works of Paradise Lost or Candlemass as to that of Emperor or Darkthrone, the resulting epicly mournful and ambient take on Black Metal is perhaps not unsurprising. Accompanied by melancholic lyrics weaving tales of misery and woe, it is perhaps not to be understated how dark the 8 songs can get over the 41 minutes. Additional bonus CD material is taken from the minidisc master of 2001's unreleased demo Sussex Hell Hound (a low-fi, cassette transfer of which is available to download for FREE at www.deathtomusic.com)
Old Forest was formed in 1998 by 3 Black Metal fans of the early 90s scene, based in Sussex, England. Kobold (vocals & synths), Beleth (bass & guitars) and Grond (drums) had adequate musical ability to pay tribute to the early sound they were fans of. They recorded 2 demos and released their debut album 'Into the Old Forest' in 1999.
In 2000, the recorded a second album 'None More Black', which was never released (there was finally a limited release in 2014). They then recorded another demo (only recently rediscovered) and then the band went into hiatus.
In 2008, the band was reactivated and recorded a trilogy of EPs recounting the 'Tales of the Sussex Weald' (the myths and legends of their local area). This was released as a full album in 2011.
In 2015, the band recorded the experimental 4 track album 'Dagian'. Kobold had just joined Norwegian band 'In The Woods', and the drummer (Anders Kobro, formerly of Carpathian Forest) expressed an interest to re-record the drums, and so joined Old Forest (Grond departing to form the band 'Orcrypt').
In 2019, the band released the album 'Black Forests of Eternal Doom', which introduced ealry 90's style Doom elements (for example, Early Paradise Lost) to compliment their increasingly original style Black Metal.
In 2021, the band release their new album 'Mournfall', which further explores the mixing of Early 90s Black Metal and Early 90s Doom.