Debut album, "Beyond Unseen Gateways", out on March 19th!

Ildaruni emerged as a raging force from the depths of the Armenian underground metal scene in the year 2016. Solidifying a permanent lineup, the Yerevan band set its focus on live performances and started recording the first demo, Towards Subterranean Realms, which came to light in July 2018 and met significant acclamation.
Musically, Ildaruni represents a blend of relentless, epic black metal and ancient folk melodies, forgotten from times immemorial. The lyrical themes explore the height of the Urartian domain through the cognitive machinations of a bygone age and the esoteric apprehension of ancient pagan occultism.
The upcoming debut, Beyond Unseen Gateways, is a hymn to the blazing light that sank into shadowy shrines, to the wild darkness that covered the debris of Ardini, to the bygone flame that enlightened the sanctum of Haldi. Delivering the blend of ancient folk melodies and traditional black metal, filled with scorching aggression and chaotic transitions, the opus introduces an authentic sound and a spiritual journey to the mysteries untold. Each song is an inseparable part of a grand ode that explores the Urartian domain’s height and the esoteric knowledge of pagan mysticism.
The album was recorded by Armen Shahverdi and Mark Erskine at Guitar Clinic Studio in Armenia. Then it was mixed and mastered by George Emmanuel (Lucifer’s Child, and ex-Rotting Christ) at Pentagram Studio in Greece, while Erskine Designs crafted the artwork and layout, perfectly capturing the essential concept of the album.
The ominous flame now burns stronger, and Iladruni is set to unleash its long-waited cryptic incantations. 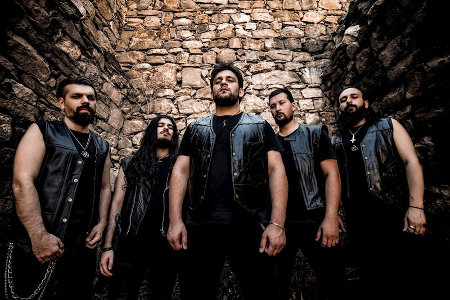 More in this category: « CODE CULTED »