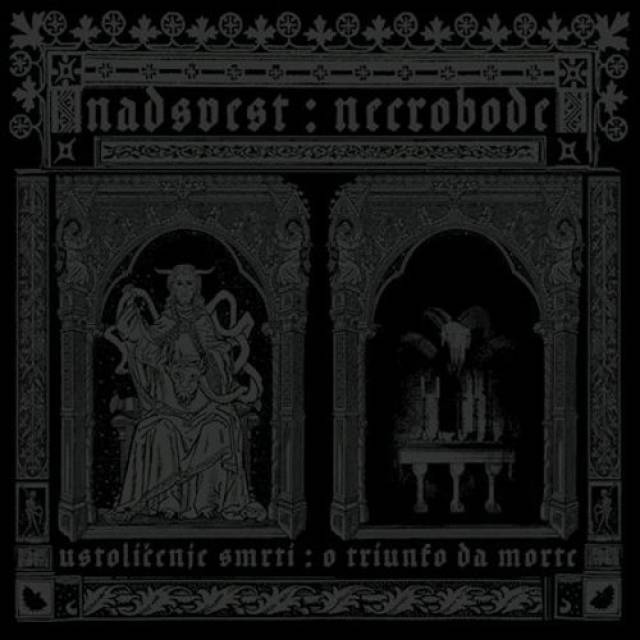 Here, Serbia faces off with Portugal for a pitch-black cauldron of devilish origin. Up first are NADSVEST, who are a duo possessing a wealth of underground experience: namely, Atterigner is currently vocalist for Norway's infamous Gorgoroth, and Krigeist is founding vocalist/guitarist of the UK's well-regarded Barshasketh. Their two tracks here are hammering, hysteric violence given ethereal flight through a frequent layer of medieval synths. With the rabidly unrestrained vocals spitting venom and the overall metal-centric push 'n' pulse of that violence, NADSVEST deliver pure black metal of an unselfconsciously '90s-rich vintage.
From Portugal comes the ungodly NECROBODE, who delivered their cult debut album, Sob o Feitiço do Necrobode, through IRON BONEHEAD in early 2020. Carrying forward the same sort of filth but arguably going even rawer, on their three tracks do NECROBODE unload a torrent of pulsing bestiality, clanging riffery, and FX-drenched vomits from the abyss. Despite the ultraviolence on display, there's a pronounced sense of desolation here, perhaps if that ultraviolence is directed inward rather than outward. Either way, the dungeons are calling, and this Portuguese power-trio are heeding the call!