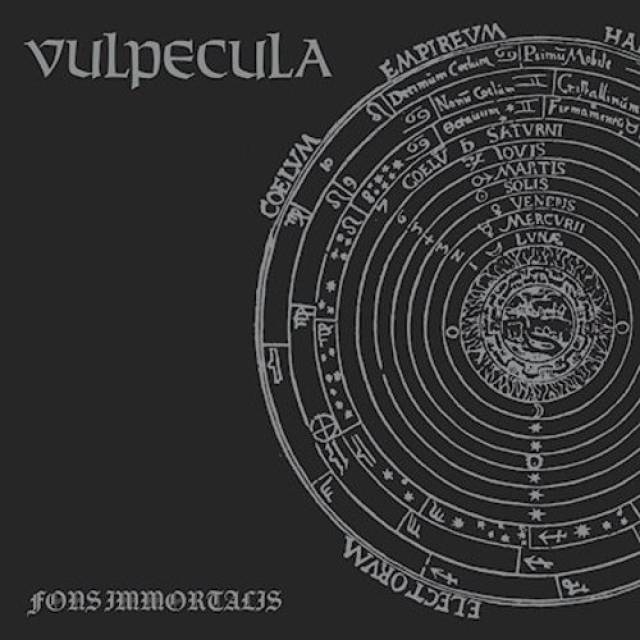 "Fons Immortalis" out on December 6th!

Chuck Keller’s name should be familiar to anyone involved in extreme metal. A true veteran, for more than 30 years, he has dedicated himself to the underground scene. His guitar playing and songwriting for Order From Chaos long ago established him as a pioneer, and since 1997, Keller has been at the helm of Midwest deathrash stalwart Ares Kingdom.
Less commonly spoken of, however, is Vulpecula, a project that occupies the liminal region between those two pillars of Keller’s career. Toward the end of Order From Chaos, Keller began exploring celestial themes with an eye toward fusing black metal with ambient, space-oriented sounds (see, for example, “Nucleosynthesis/De Stella Nova/An Ending in Fire”). After the dissolution of Order From Chaos, Keller reached out to drummer Chris Overton (Nepenthe/Legia) with an idea for a new project, and Vulpecula was born.
Drawing the band name from a well-known constellation (the “little fox” which holds a goose in its jaws), the duo focused on creating an atmosphere that conjured the endless desolation of space. In 1995, Vulpecula released the Phoenix of the Creation demo on the Eternal Darkness label from Arizona (which had previously put out recordings by both Order From Chaos and Nepenthe), and the label re-released it as a 7” soon thereafter.
Opening the three-song demo is the title track, an instrumental keyboard piece based on a piano composition Keller wrote several years earlier. On the tracks that followed, “The First Point of Aries” and “Seven Layers of Light,” Vulpecula played a completely unique style of black metal, perfectly evoking the ethereal transcendence of the astral domain. While there is no direct antecedent to the Vulpecula sound, the most prominent influences are demo-era Katatonia, Mortem (Norway), early Samael, and Bathory. (Anyone who is familiar with Keller and his work will know that all of his compositions bear, to some extent, the influence of his close friend Quorthon.)
In June of 1996, Vulpecula entered the studio to record the monumental Fons Immortalis MLP. Originally released as a 10” by Merciless Records, Fons Immortalis is the undeniable zenith of the band’s concise catalog. Like the demo, the 10” opens with an instrumental track, “Astride the Darklands,” written by Overton, followed two new tracks, “Fons Immortalis” and “Down Among Them.” The second side of the MLP featured a remixed and partially re-recorded version of the demo.
Few, if any bands, have proven capable of achieving such an evocative atmosphere as Vulpecula attained on the Fons Immortalis MLP. “It just sounded like darkness,” Keller explained. But this is not the sort of “darkness” associated with Satan or evil; rather, it is an opaque existential darkness derived from the limitless solitude and vast emptiness of the universe. “Darkness is a vehicle through which you come to know yourself,” Keller suggested before quickly qualifying his observation, “if you’re brave enough.”
In 1998, Vulpecula recorded five more songs intended for a full-length called Down Among Them, but feeling the experiment had reached its conclusion, Keller and Overton disbanded the next year, and the completed songs remained unreleased until 2006, when Invictus Productions released the In Dusk Apparition MCD. While working on new material, Keller wrote a song that piqued his interest did not feel quite right for Vulpecula. The song marked a change in direction for Keller, after which he began pursuing the style that would come to define Ares Kingdom, and the song later emerged as “Ashen Glory” on the band’s second album.
Relegated to obscurity for too long, Nuclear War Now! is honored to present this reissue of the Fons Immortalis and Phoenix of the Creation recordings, which have been unavailable for over 20 years. Additionally, in gathering the material for this release, Keller uncovered an unreleased alternate studio recording of “The First Point of Aries.” 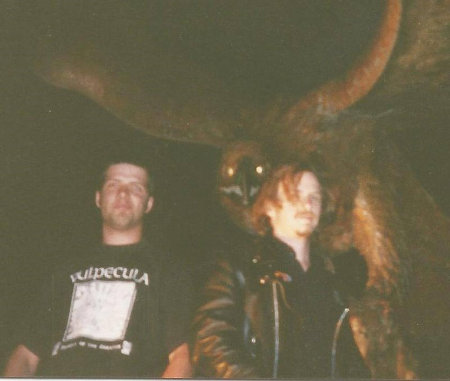 More in this category: « THE MAGIK WAY BEAST WITHIN THE SOUND »