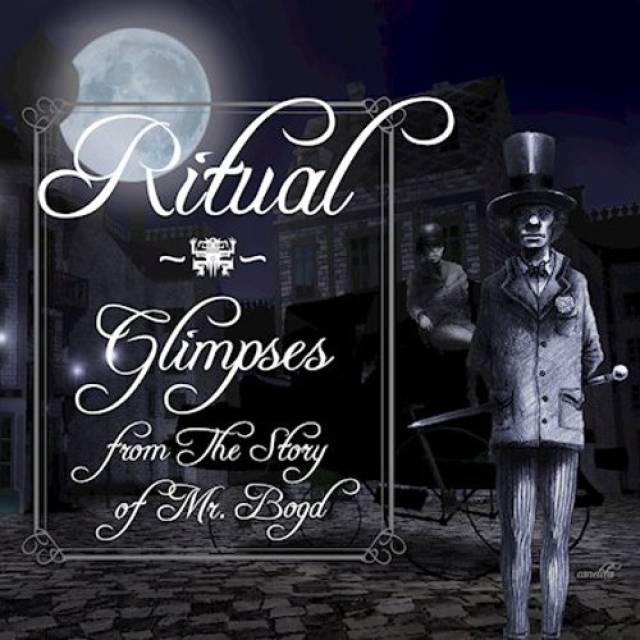 New EP "Glimpsed From The Story Of Mr. Bogd" out on November 27th!

It seems almost like an eternity since Swedish prog rock act Ritual brought out their fifth and most recent album The Hemulic Voluntary Band. 13 years which saw the world continue to revolve (some may say at an ever increasing pace), but Ritual have never been forgotten by their fans. The artistic potential of the band surrounding vocalist, guitarist and composer Patrik Lundström is simply so outstanding that the absence of new material would have left a major gap on the musical landscape. And here comes the good news: Ritual are back! To start off with, they’re planning to release a 4-track EP entitled Glimpses from The Story Of Mr. Bogd, which promises lots of auditory enjoyment and at the same time a foretaste of the things to come. Because, without giving too much away: Ritual have not only got some awesome new music in store, they also have a surprise up their sleeve. But one thing at a time … Although a hiatus of more than ten years may seem a little unusual, in the case of Ritual there’s a good explanation for it. “In fact it’s been a combination of a number of reasons,” says Lundström explaining the details: “On the one hand we’ve always had longer breaks between two releases, such as a gap of five years between our first two albums. That’s mostly due to the fact that we have very demanding standards, are very critical of our own output and very thorough in our work. That kind of approach takes time.” In addition, the Ritual frontman has moved house and no longer lives in Stockholm like his three colleagues Jon Gamble (keyboards, harmonium, harmonica & vocals), Fredrik Lindqvist (bass, bouzouki, mandolin, flutes etc.) and Johan Nordgren (drums, percussions), but three hours away in Örebro, which has naturally had an effect on their mode of operation. And thirdly: “Following our most recent tour in 2009, Fredrik suddenly surprised us with the news that he had written an exciting story for a full concept album. We loved the story as well as the idea of a concept album, but soon discovered how complex it is to write music to an existing story. All that, in combination with a number organisational hurdles, is the reason why it took us so long to complete the music, or rather why we’re just about to complete it.” Contact: This email address is being protected from spambots. You need JavaScript enabled to view it. - for artist photo & cover jpg in printable size please look at tempusfugit.de “press”. Tempus Fugit/Dirk Jacob, Kolumbusstr. 27, D 70771 Leinfelden-Echterdingen, 0173-5304802, www.tempusfugit.de To give you a vague idea of the complexities that Ritual have had to deal with these past years, we should perhaps mention that there will in fact be two (!) albums – as a coherent story – scheduled for release in the coming time. To avoid taxing their fans’ patience any longer than absolutely necessary, Ritual are set to present on 27 November 2020 their latest EP Glimpses from The Story Of Mr. Bogd, which will feature four of the new songs, three of them from part I of the concept story about the fictitious Mr. Bogd, a successful business man who is – to put it briefly – searching for the meaning of life. The EP’s fourth song will feature on the second album. Musically, Glimpses from The Story Of Mr. Bogd hints in a condensed format at what Ritual fans may look forward to: outstanding progressive rock with musical and lyrical depth and a wide range of stylistic facets, from rocking to laid-back, from electric to acoustic, from anthemic to very intimate. The opener ‘Chichikov Bogd’ presents the band’s epic side, supported by a brisk pace and catchy chorus. ‘Mr. Tilly And His Gang’ on the other hand strikes a more progressive note and features reminiscences of the Beatles between the lines (or rather: between the notes). ‘The Three Heads Of The Well’ highlights Ritual’s more acoustic side with a mythical, dreamy flair. The EP closes with the nine-minute ‘The Mice,’ lifted off the second part of the concept story, mixing rock with folk influences and sparkling with a multi-layered large-scale production. “We’ve consciously selected those four numbers because they highlight the broad range that our two new albums will feature,” explains Lundström, who can hardly wait to present the new material live to the public. He adds: “We want to return to playing live as soon as possible to present our new songs. We’ve done our homework, now all we have to wait for is the end of the lockdown.”