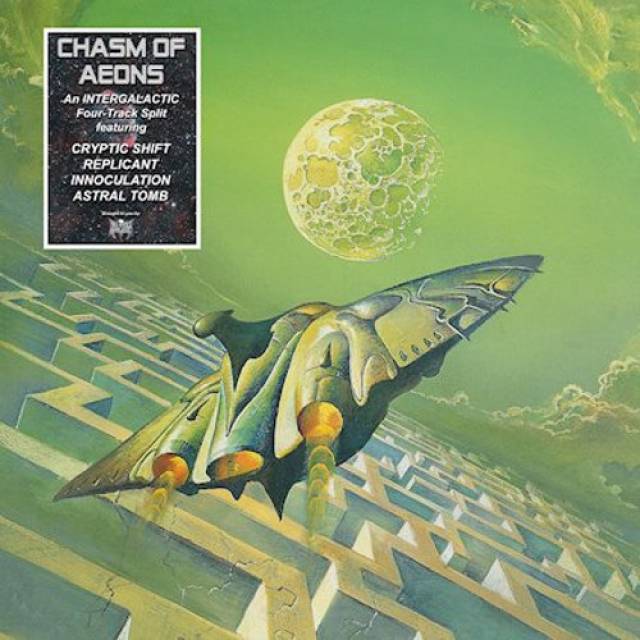 Featuring four tracks for a total of 19 minutes, Chasm of Aeons is a quick 'n' concise slab of sci-fi death metal sorcery. CRYPTIC SHIFT are up first with the aptly titled "Cosmic Dreams." Hot off the MASSIVE critical acclaim for Visitations from Enceladus, their BLOOD HARVEST debut album from earlier this year, these still-blooming British stalwarts here effortlessly create a maelstrom of mesmerizing math and hacking-into-the-mainframe horror, all threaded together with classy (and cosmic) soloing. REPLICANT follow with another aptly titled track, "Unbeing." Here, these on-the-ascent Americans build a dense 'n' dissonant monolith of deep-space dread. INOCULATION are next with "Xerthaneus," which is just as tricky and treacherous as that title promises: super-dizzying cosmic DEATH done with insane precision, and sure to mangle your mind. Closing out proceedings are ASTRAL TOMB, who verily create their moniker with the slamming 'n' sluicing "Transcendence From the Mortal Plane Guided by a Familiar Phantasm." And their track literally sounds like that, and more: angular, skronking, and shit-heavy!
Completed by stunningly evocative cover art, Chasm of Aeons is bound to be the definitive word on death metal that's cosmic, sci-fi, and mathematically beyond. Enter at your own peril!
www.facebook.com/crypticshift
www.facebook.com/replicannj
www.facebook.com/inoculation
www.astraltomb.bandcamp.com