In 2023, rising modern symphonic metal outfit AD INFINITUM re-enter the scene with their electrifying third studio album, Chapter III – Downfall, via Napalm Records. The unit's signature sound - consisting of heavy, modern riffs paired with haunting vocal melodies of incredibly talented Melissa Bonny - has positioned them for unstoppable ascension in the metal world. Following the massive stir caused by songs like “Marching on Versailles” and “Unstoppable” - which have each garnered over 2.7 million and 2.3 million video views, respectively, to date - this next offering provides another wave of proof of the breakout success they have earned since the release of their debut album in 2020.
Game-changing new album, Chapter III – Downfall, bewitches with an innovative sound full of soaring melodic splendor juxtaposed against brooding, dark and even gothic heaviness. Exploring concepts of Ancient Egyptian history and mythology, AD INFINITUM melds a perfect balance of storytelling and technically sophisticated songwriting, spreading their wings in both areas of production and lyricism. Charging instrumentals, pounding drums, chunky, grooving riffs, mind-boggling solos and enchanting orchestrations build the band's unique world of sound as frontwoman-to-watch Melissa Bonny’s soul-stirring cleans and haunting growls put her incredible vocal range on display - dropping jaws with each line.
Produced by AD INFINITUM and Jacob Hansen at Hansen Studios, Chapter III – Downfall showcases that this up-and-coming quartet can effortlessly turn the genre upside down, gracing it with contemporary vibes without forgoing their signature metal origins, and thrilling all metal fans as they rise to the top!
AD INFINITUM add: “The word is out, Chapter III - Downfall is on its way! For this album, we explored stories and legends of Ancient Egypt with, as star character and main inspiration, Cleopatra. We added some extra dimension and sounds to our signature AD INFINITUM sound to create an extra dimension, transporting the listener to mystical landscapes of another era. We are beyond excited to start to unveil this new record!“
Opening track “Eternal Rains” immediately catches your breath with a captivating chorus, followed by electric “Upside Down” - defying all rules by combining epic melodies and demonic growls with finesse. “Seth” convinces with a resounding modern sound and eerie ambience that’ll have new fans turning heads, whereas “From The Ashes” impresses with reminiscence of artists like Meshuggah, proving that AD INFINITUM never fails to deliver surprises. “Somewhere Better” creates a perfect symbiosis of vicious vocals and ethereal soundscapes, carrying the listener far away with its wide range of infallible instrumentals. “Under The Burning Skies” directs its haunting vocals towards the horizon, unfolding into an intense mid-tempo ballad shortly after. As a special treat, AD INFINITUM welcomes Chrigel Glanzmann of Eluveitie, who provides his voice for the atmospheric monologue introduction on “Legends”, paving the way for a touch of Middle Eastern-inspired djent flavor. 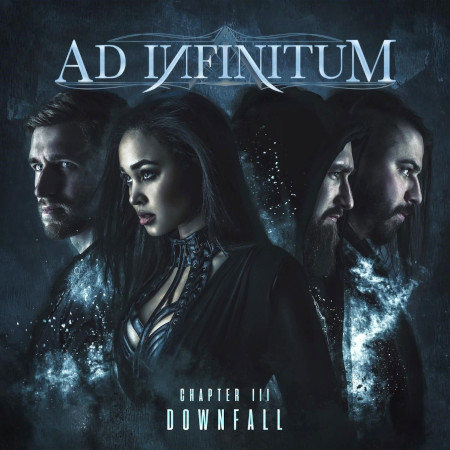