All aboard! The world’s favorite Pirate Metal Drinking Crew, ALESTORM, are taking you on a wild, wet ride across the seven seas with their new live album/DVD/BluRay, Live in Tilburg, out May 28, 2021 via Napalm Records!
Starting within the very first seconds of the energetic “Keelhauled”, it is crystal clear that ALESTORM are one of the most creative and unique live bands out there today - and judging by Tilburg’s incredible live audience of 3,000 fans, the band’s unmatched energy leaves no one standing still. Feast your eyes on ALESTORM’s exciting funfest of a live show experience - featuring everyone’s favorite giant blow-up rubber ducky and loads of alcohol - from the comfort of your own couch!
Christopher Bowes about Live in Tilburg: "Oh wow! Live concerts! Remember those? Nah, me neither. Anyway, a couple of years ago we played a giant show at the 013 in Tilburg, Netherlands. It was a whole lot of fun. We even filmed the whole thing. And when we released the recording for free on YouTube last year, a whole bunch of you said you really liked it. And being the treasure-hungry sellout pirates that we are, it made us realize we could probably convince a bunch of you to buy it if we wrapped it in plastic and stuck it in a big wooden box. We even added some low-effort bonus features. Enjoy!"
Excellently produced and mixed by the renowned Lasse Lammert, who has already been involved in ALESTORM’s studio albums Curse Of The Crystal Coconut, No Grave But The Sea, Sunset On The Golden Age and many more, Live in Tilburg features an amazing mix of ALESTORM’s most beloved hits like “Drink“, “Mexico”, “Alestorm”, “Hangover”, “The Sunk’n Norwegian” and of course, “Fucked With An Anchor”.
The live album will be available on splatter-colored double-LP with a slipmat and a patch, as well as on mint colored and golden colored vinyl. The special edition of Live in Tilburg comes in a wooden box, along with a CD+DVD, a mediabook and a 7-inch vinyl featuring two new acoustic ALESTORM cover songs! Live in Tilburg’s immersive experience is the true definition of what ALESTORM is all about – an endless fountain of foot-stomping, riff-busting, piratical singalong fun. A must-have for all the filthy landlubbers out there! 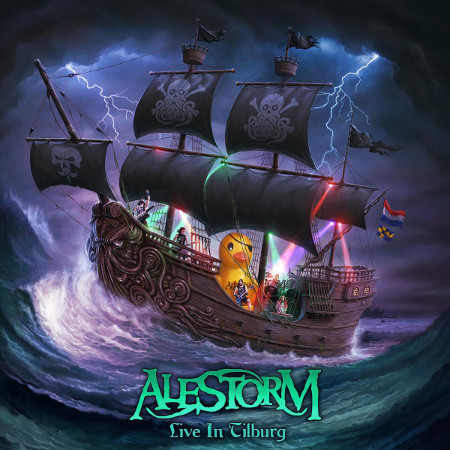 More in this category: « SILVER LAKE TYGERS OF PAN TANG »