“Live ByFire II” offers an intense and passionate performance captured in front of a truly dedicated and wild audience in Mexico City, 2019. “Live by Fire II” lets you experience ENFORCER at the top of their game and marks an outstanding live record documenting the group’s steady path to global recognition in recent years. It also serves as a stunning reminder of how many heavy metal anthems ENFORCER have crafted on their total of five studio albums so far! From the speed metal attack of 'Destroyer', 'Searching For You', ‘Midnight Vice’ to perfect sing-alongs like ‘From Beyond’, ‘One Thousand Years In Darkness’ and ‘Take Me Out Of This Nightmare’, the enthusiastic crowd and powerful sound of “Live By Fire II” result in a captivating and extremely entertaining listen.
Physical formats of the release will be including extensive booklets containing a tour program, liner notes and tons of photos compiled and designed by vocalist/guitarist Olof Wikstrand recapturing ENFORCER’s touring cycle for the albums “From Beyond” and “Zenith” during the years 2015-2020. 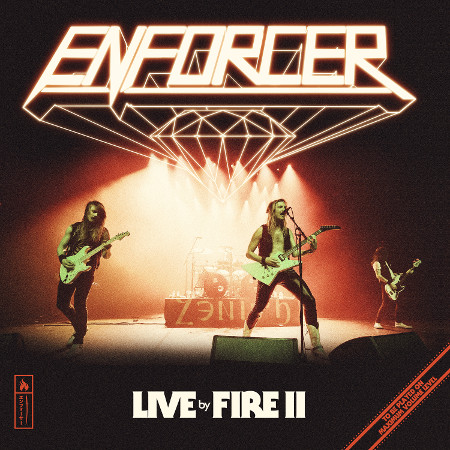 More in this category: « ANNISOKAY TOMAHAWK »