Airbourne will release their fifth studio album Boneshaker on October 25th via Spinefarm Records. The band revealed the cover artwork for BONESHAKER, which was a collaboration between Matt Read of Combustion Ltd. and Sean Tidy of Design House Studio Ltd.
On the topic of the artwork, guitarist Matthew Harrison states: “The whole sentiment we were after was about rock ‘n’ roll for life. We wanted to create something tattoo worthy, classic artwork that will stand the test of time.”
With the creation of Boneshaker, all-action Aussie rockers Airbourne decided to take the bolder path; to align with Nashville’s six-time Grammy Award-winning producer Dave Cobb, whose credits include both Chris Stapleton and the ‘Star Is Born’ soundtrack, as a way of staking out new turf away from comfort zones and safe havens…
“It’s a live gig in the studio. This is always something we wanted to do – find a way to bring the soul and power of an Airbourne live show into an album. Cobb caught our lightning and put it in a bottle,” states bandleader Joel O’Keeffe.
Relocating to historic Studio A on Nashville’s Music Row, Cobb’s natural home and one of Music City’s most prized creative hubs, the four musicians set themselves a challenge: to make a record cut from the same frayed cloth as those classic late-’70s recordings from Australia’s legendary Albert’s house of ‘Oz Rock’ that inspired the band so much.
There are no weird tangents here, no un-called for asides, no messin’ about. This is straight-down-the-line pure rock ‘n’ roll drama smelling of burnt rubber, spilt gasoline and valves glowing red hot. No ballads, no acoustic guitars, no keyboards. 10 tracks, 30 minutes of music. Everything lean an’ lethal, stripped to the bone, to those essential elements that rock ‘n’ roll requires to properly do its work: raging guitars, pounding bass ‘n’ bass, vocals packed full of real personality – the kind of passion that only comes from willfully pursuing a life on the line.
As always, you can find Airbourne on the road. They will be crisscrossing the planet, in true Airbourne fashion, until 2022.
“We are pumped about playing these new songs live, it’s always cool to do that first tour on the album cycle, especially that first run of shows. The first time we hear people singing the words of a new song back at us, it makes us really appreciate how much our Airbourne family around the world supports us,” states drummer Ryan O’Keeffe. “2020 is already shaping up to be a jam packed year.”
Airbourne is an Australian hard rock band formed in Warrnambool in 2003 by brothers Joel O’Keeffe on lead vocals and lead guitar, and Ryan O’Keeffe on drums. The line-up was completed with Justin Street on bass guitar and backing vocals, and David Roads on rhythm guitar and backing vocals. In 2017, Roads amicably stepped down, with Matthew Harrison stepping up as his replacement.
The band’s debut album, Runnin’ Wild, was released in June 2007, certified Silver in the UK, and charted in the top 30 of the ARIA Albums chart, appearing on the US Billboard 200; UK, France, Austria and Switzerland Albums chart.
Their second album, No Guts. No Glory., came out in March 2010, reached top 20 in Australia, Austria, New Zealand, Finland, Greece, Sweden and Switzerland, as well as going in at #31 in the UK and Top 100 of the US Billboard 200. The third studio album, Black Dog Barking, was released in May 2013, and peaked at #17 in Australia and came in top 20 in Austria, Finland, Germany, New Zealand, Sweden and Switzerland, as well as top 100 in the UK, Spain, Norway and France. In October 2016, Airbourne released their fourth album, Breakin’ Outta Hell, which peaked top 5 in Austria, Germany and Switzerland; #9 in the UK; and top 20 in Australia. The band has played an estimated 1000+ shows since their formation, including multiple appearances at some of the biggest festivals in the world, such as Wacken, Download, Hellfest, Rock am Ring and Rock im Park. 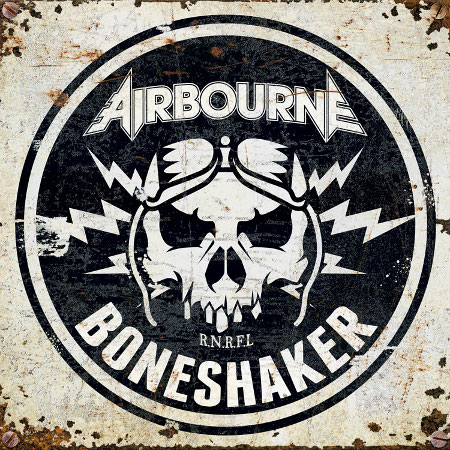