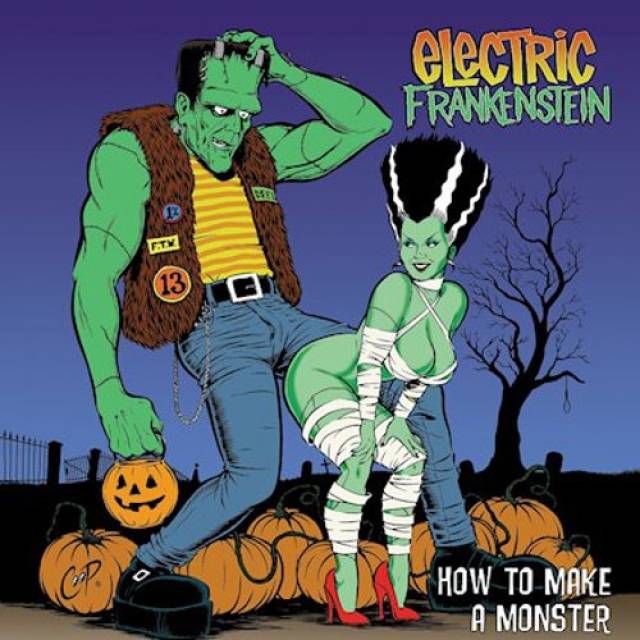 "How To Make A Monster (20th Anniversary Edition)" out now!

The greatest underground band to come out of New Jersey since The Misfits, ELECTRIC FRANKENSTEIN have consistently maintained their worldwide cult popularity thanks to constant touring and a staggering - some would say ludicrous - discography comprised of 100-plus singles, EPs, compilation tracks and full-length releases thanks to high demand from indie labels around the globe. Even after label woes, changing trends and enough lineup changes to rival Spinal Tap, the band has stayed true to their undying belief in all things ROCK!
1999’s How to Make a Monster was the band’s first release on Chicago’s Victory Records, and the album was the result of a renewed sense of stability within the ELECTRIC FRANKENSTEIN camp. Produced by the band, How to Make a Monster stretches out in the songwriting department in major ways. For example, the epic mid-tempo burner “Pretty Deadly” would have stood out like a sewn-on sore thumb on earlier releases. How to Make a Monster’s explosive track listing is bookended by two of the most unique tunes in ELECTRIC FRANKENSTEIN history. “I Was a Modern-Day Prometheus” opens the album with the spoken intro from the 1931 film version of Frankenstein, and “Phatty Boom Batty” - an uncharacteristic slice of anthemic arena rock - concludes the album despite the fact it was never meant to be on it in the first place. As guitarist Dan Canzonieri states, “A lot of people don’t realize that we wrote that for a Kevin Smith movie. They didn’t end up using it, so we just decided to put it on the record anyway.”
As of this writing, ELECTRIC FRANKENSTEIN is rehearsing to celebrate the 20th anniversary of How to Make a Monster with overseas tour dates that will see them play the album in its entirety for the first time ever. Naturally, new music is on the way. In addition to recently recruited drummer Rubin Badillo (Crash Street Kids), the band’s current lineup is rounded out by California-based touring guitarist Jaime Pina (Chemical People/Down By Law/45 Grave/Christian Death 1334/a million others), who’s been friends with the Jersey crew for decades.
With How to Make a Monster hitting 20 years and the band scratching at the door of a 30th anniversary, it appears that ELECTRIC FRANKENSTEIN did something right. After all these years, the band shows absolutely no signs of pulling the plug on the sonic creation founded all those years ago.
“The key to longevity is staying youthful in that we still love music. Everybody is creative, and we keep changing things. It’s about staying alive like that, staying in it and not becoming distant from it.”

More in this category: « BY THE SPIRITS ASTRALIUM »