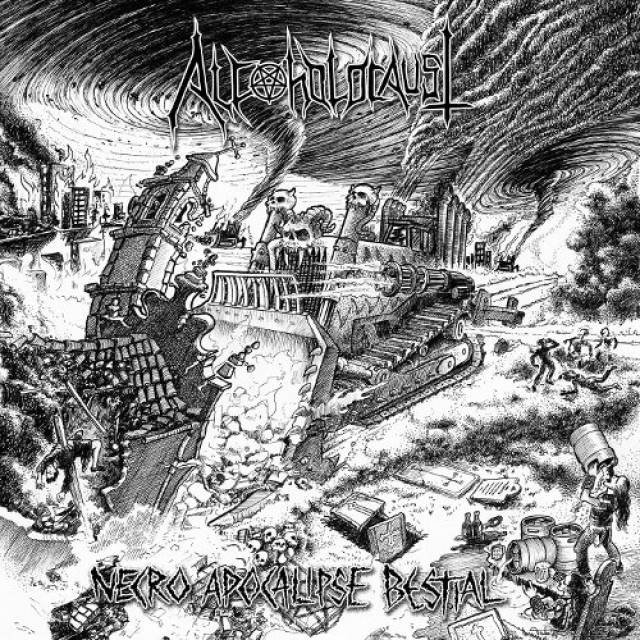 Helldprod Records sets September 5th as the international release date for Alcholocaust's highly anticipated debut album, Necro Apocalipse Bestial, on CD, vinyl LP, and cassette tape formats.
Expursed from the vast and highest Portuguese mountains, the underground genes run ruthless and cold in the arms of those that aim the poisonous path of metal, unless you use those same features to warm yourself along with the night fiery ghouls. Speaking of which, what better way to do that than get shitfaced forever? It seems a curse, but in this case, it gave birth to Alcholocaust back in 2006: The Thrashing Demons of Speed Chaos Beverage!
After getting their banging heads hydrated with all sorts of alcohol, Alcholocaust always showed their musical abilities to the extreme and believe that no raw demo recording could stop them a bit. Instead, and after a successive outburst in their prime times, they have built a legion of maniacs that party hard and unleash the metal fumes like no other. Highly inflamed by the old masters of the Teutonic school of metal, they present themselves armed to the teeth and ready to indulge you neck-breaking aches in honor of their loyal inspirations such as Destruction, Sodom, Kreator, and Germany's Poison.
"Show No Mercy" is Alcholocaust's theme since they care not about the scene or any kind of trendy, poser-like mainstream attitude. These guys are metal PUNKS and provide the necessary SCUM into your ears. So welcome to this diabolical gathering and embrace their first full-length in 13 years (random but appropriate lucky number), Necro Apocalipse Bestial, at its fullest haste.
Relentless to the bone and iron to the core, these 10 songs will tight you in chains and unleash your fury upon the ordinary metallic traditions. Fully sung in the native language, there’s not one single moment of fragility or chastity in sight. On the other (left) hand, you can raise your horned fist and hellbang to this powerful, impious, and obsessive rocking madness. Mandatory for backpatches, bulletbelts, spiked leather wristbands, heavy metal worshipers, and worldwide desecrating drinkers!

More in this category: « TIDES FROM NEBULA LIGHTNING BORN »