Frankie Caracci, known for his guitar work in Canadian symphonic death metal band Vesperia, has been simmering a side project entitled "Cellular Damascus" and is now ready to give listeners around the world a taste of what he’s been doing on March 13, 2019.
"Cellular Damascus" is an instrumental solo project that came to light after Caracci’s win on season one of “Shredders of Metal” presented by Banger TV. Technical, groovy and energetic, "Cellular Damascus" lets the listener focus on the guitar work that he takes great pride in orchestrating.
“I want fans to have fun listening to it. I wanted to create interesting melodic phrases but still have heavy riffs to headband along with, shred hard but not lose sight of the music and try to have a clear mix where things aren’t overly processed but all instruments/parts are still clear and audible.”
Working consciously on each track, the scene for the album is a suspenseful set with “So It Begins” and concludes majestically with “Fall Of The Hammer”. All four tracks on this debut flow together and show off excellent musicianship. Excited to be focusing on more solo work in the future, Caracci has confirmed another release in the future.
Cellular Damascus is the instrumental solo project from Vesperia’s Frankie Caracci. Looking to try something new and forge his wide array of influences together to make something that is uniquely his own.
The first release, the self-titled EP (2019), introduces fans to the melodic and technical headbanging music on which Caracci solely wrote, performed and produced. Influenced but guitar mavericks such as Jeff Loomis, Joe Satriani, Jason Becker, and Michael Romeo and genres such as modern and classic heavy metal thrash, prog and death metal there is an assortment of features in each track that keep the listener on their toes and attentive to the music. 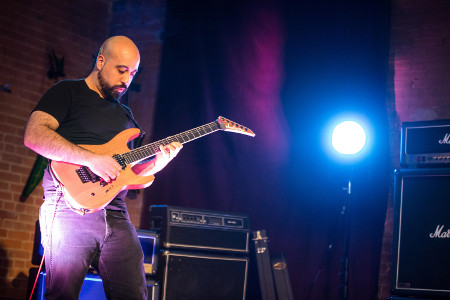