New EP “Horrid Pestilence Of Death” out in April!

Corrupted corpses flood out the tombs!
A new Mexican Death Metal entity is emerging from the deepest abyss to bring mass burial. ROTTING GRAVE “Horrid Pestilence of Death” EP, contains 6 tracks of cadaveric death metal full of decayed blood.
Formed by members from Morbid Messiah, Portrait of Ruin, Human Trash and Ictiosis, this is a repulsive piece of darkness of the new generation, you can’t miss.
“Very heavy with a lot of great riffs in there and a love the sick solo bass lines here and there. A good mix of some slow heavy riffs giving way to some fast death. Sick vocals as well. It all works together to bring a feeling of fear and desperation” – Mark Sawickis (Impetigo)
ROTTING GRAVE was officially formed in June of the year 2018 in Guadalajara, Jalisco. Mexico. It was born with the idea of forming a death metal band inspired mainly by the horror and the cadaverous sound of the 90/s.
The band is formed by Roberto Trejo (guitar), Pablo Aceves (guitar/vocals), Nestor Marquez (bass), and Saul Anzaldo (drums).
Its members are part of other bands like: Morbid Messiah, Ictiosis, Worthless, Condemnation, Portrait of Ruin and Human Trash. 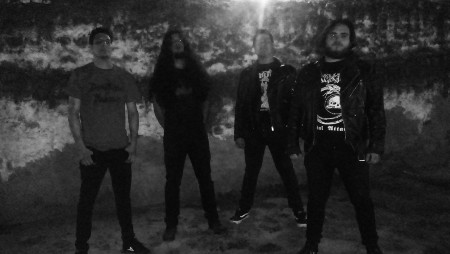