New Album "Sideways In Time" out on April 12th!

Citing a strong fascination with our place as earthlings in the cosmos and the origins of our planet, our solar system, our galaxy, and ultimately our universe, GONE COSMIC is a soulful psychedelic rock band from Calgary, Canada.
Combining fuzzy distorted guitars and powerful vocals, GONE COSMIC tinker with experimental elements alongside 70s influenced heavy groove, which can be experienced with their first album ‘Sideways In Time’ set to be released on April 12, 2019, through Kozmik Artifactz with a seven-date tour to compliment it.
"‘Sideways In Time’ focuses on the never-ending push and pull of decisions and consciousness. Exploring the effects of outside influences and really putting to light the concept that our minds control us, but we don’t and won’t ever have complete control of our minds. ‘Sideways In Time’ was written/composed to stimulate senses and be a guide on a galactic journey. Everyone in the band is bursting at the seams during our set - it’s high octane chaos, driven by a thousand horsepower engine ready to explode into a million pieces of intergalactic space dust.”
Comprised of musicians from Western Canadian staple acts Chron Goblin, Witchstone, Funkenshiest, and The Torchettes, fans have an idea of what to expect from this quartet.

Biography by Christine Leonard
Championed by a soaring songstress Abbie Thurgood (The Torchettes), whose boldly evocative tones recall Skunk Anansie chanteuse Skin and Alabama Shakes’ Brittany Howard, and accompanied by an agile and aggressive psych-rock outfit, composed of guitarist Devin “Darty” Purdy (Chron Goblin), bass player Brett Whittingham (Chron Goblin), percussionist Marcello Castronuovo (Witchstone), Gone Cosmic has carved out an expansive domain that stretches from sweltering Southern sludge pits to breath-stealing sonic spacewalks.
A blood (orange)-scented breeze that bows the trees, Gone Cosmic chases the infinite haze from the skies and puts it right back in your eyes. Groove-mining breakdowns become the stuff of legend as the four pieces’ floor-thudding tail kick and hellfire halo holler originates a whole that is far more potent than the sum of its individual elements. Meet your new astromancers, the phase-shifting and hard- rocking force that channels the empyreal sounds of heaven on Earth. 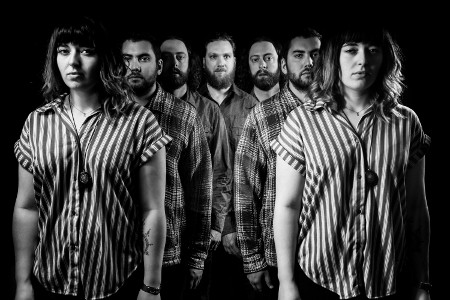