Helter Skelter Productions (distributed & marketed by Regain Records) sets March 29th as the international release date for Aihos' highly anticipated debut album, Hävityksen Maa, on CD, vinyl LP, and cassette tape formats.
As precluded by their Ikuisuuden suojaan debut EP - originally self-released in 2013, but then reissued on vinyl, CD, and cassette formats by Helter Skelter in 2018 - Aihos breathe the ancient essence of classic, paradigmatic Finnish black metal. That short-length swiftly introduced the band to the international underground, arriving fully formed and exuding the confidence of veterans, but alas, the quintet have eclipsed that feat with the longer 'n' stronger Hävityksen Maa.
A true intensification on every level, Aihos' Hävityksen Maa is simply freezing 'n' furious Finnish grandeur. Each song kicks in with both catchiness and atmosphere; these riffs will COMMAND immediate possession as well as repeat headbanging. And yet, for the righteous, roiling filth Aihos unfurl, there's equally an epic side to those songs, invoking mysticism and wonder and even a bit of aristocracy. One could say these subtle-yet-present contrasts have long been latent in Finnish black metal, and Aihos are no different in that regard; however, their ability to capture the listener's imagination - and continue doing so, many listens later - belies the work of true masters.
Hävityksen Maa may be a debut album, but it could just as well have existed forever, so timeless is its magick. 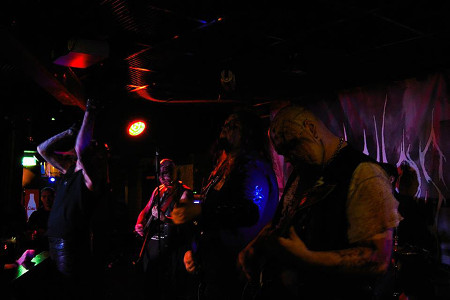 More in this category: « BASALT TELEPORT »