Shadow Records (distributed & marketed by Regain Records) sets March 22nd as the international release date for Ultra Silvam's striking debut album, The Spearwound Salvation, on CD, LP, and cassette tape formats.
Hailing from Malmö, Sweden, Ultra Silvam are a power-trio who honor their homeland's longstanding black metal idioms whilst injecting copious amounts of power and personality into the form. They made a quick-hitting yet auspicious debut in 2017 with their self-titled demo, which was later released on 7" vinyl that year by Shadow Records.
Taking that demo's foundation and fleshing out those ideas in a fuller and more realized form is the full-length The Spearwound Salvation. Tellingly titled, The Spearwound Salvation blisters forth with an incredibly ripped-raw style of black metal that possesses a poignant, magical sort of melodicism. At once familiar and foreign, Ultra Silvam attack with urgency and emotion but always with an palpably human touch that spits in the face of so much sterile "extreme metal." Every ringing chord, every bashed drum, every slaughtered tongue: each and every note and movement across the album bleeds an authenticity that's refreshing to behold. And yet, that would all be for naught if the band didn't possess commensurate songwriting chops - and indeed they do here, all seven songs making swift, enviously compact work within The Spearwound Salvation's 28 minutes. Many of these riffs will possess you for days, if not weeks or months or...
Present thy flesh to Ultra Silvam and prepare for The Spearwound Salvation! 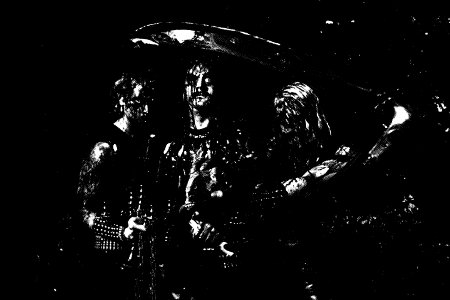