Self-titled album  will be released on the 1st of March!

Formed in Rio de Janeiro in 2011, CARAVELA ESCARLATE’s lineup of David Caravelle on vocals, bass, guitars and violins, Ronaldo Rodrigues (MASSAHARA, ARCPELAGO) on  Keyboards and Elcio Cáfaro on Drums, are a trio heavily inspired by both English and Italian ’70’s Prog Rock, but they draw on traditional and  popular Brazilian music, which gives them a special, and quite unique,  sound.
Whilst the band’s 2017 debut album “Raschuno” was more acoustic, “Caravela Escarlate” is a huge step towards a more keyboard-driven, classic prog rock sound for the band.   It is an album that almost sounds as if it could have been recorded in 1973, but the lyrics (in Portuguese) give it a distinctly modern edge, inspired, as they are, by science fiction, comic books and environmental concerns.
Recorded at the Mata Studio in Rio De Janeiro in 2017, the album follows the adventures of Caravela Escarlate, which, translated means “Crimson Ship”, an alien being from Sideral space  that can transform itself into its own means of transport – specifically a ship.   And you’d be hard-pushed to find a better subject for a spaced-out, retro prog album than that! 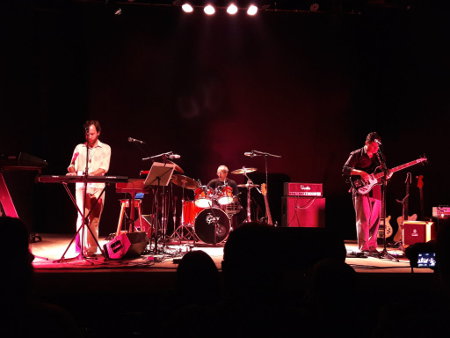 More in this category: « THE PILGRIM SECTION H8 »