Sweden’s THE RIVEN are set to release their debut full-length via The Sign Records!
THE RIVEN is an electrifying powerhouse - envision Heavy Blues Rock, focusing on big choruses and mean riffs. Progressive, psychedelic and classical musical elements standing side by side with a soulful and vigorous voice. Each song, a chapter, revealing fates and tales from the past and the future. The album was recorded with Ola Ersfjord (Tribulation, Lucifer, Primordial) in Madrid and features an artwork by Maarten Donders. A pure injection of Rock!
In 2018 The Riven went to Madrid, not to spend time under the Spanish sun but rather curled up in the valved cellar studio at Holy Cuervo Studios. In ten days they powered through the record’s nine songs producing an album that in the words of the drummer Olof Axegärd  “Is loud, is rock, is soul, and prog, it has it all!”. The Riven will be releasing their highly anticipated first full length with The Sign Records in the spring of 2019. Produced by Ola Ersfjord (Lucifer, Primordial, Dead Lord) the album manages to merge the diverse influences of its four members into a solid unit of Rock and Roll, that will leave no one oblivious.
Somewhere in West London, in the same neighborhood as many 60s British Rock bands like The Who and The Rolling Stones came alive, singer Totta Ekebergh, guitarist Arnau Diaz and bass player Max Ternebring were living together in a typical suburban house. As modern vagabonds of the western world, their love of rock put them together under the same roof where music was flowing out of every room. After an alcohol fueled songwriting session between Diaz and Ternebring they decided they needed to start a band together with Ekebergh on vocals. With this sweet trio on the move they needed a drummer and for that they recruited Olof Axegärd. “Olof was the only one that would party with us and be able to play loud grooves in the morning, so we went with him” - Max Ternebring
Throwing all their different musical influences together, they ended up with an electrically charged cauldron that was too hot to touch! “It was like I entered a whole new dimension and melodies were being drawn out of me!” says Totta. Díaz brings the frantic riffs and the bluesy licks, Ekebergh gives you soul and hooks,  thunder circulates as Ternebring stirs up melodic bass lines harmonising simultaneously with guitar and drums while Axegärd brings the NWOBHM drive and the proggy touch to the mix.
During the cold and foggy days of November 2016 The Riven made their way to the studio in East London where they would immortalise their first EP ‘Blackbird’. As Angry Metal Guy puts it: “The five tracks on Blackbird are short, snappy, and more catchy than airborne ebola”. Blackbird is the band’s first milestone that showcases their talent as songwriters as well as their proficiency behind their instruments. The EP presents a solid mix of the bands wide range of influences. You’ll find reminiscents of classics like Thin Lizzy, Grand Funk Railroad or early Rush but you’ll also relate it to more contemporary sounds like Rival Sons or Kadavar.
“The Riven have made a compelling statement with Blackbird, and there’s no reason for them to be any less than the top of the heap in short order” - Invisible Oranges. Getting excellent reviews from the most influential retro-rock and stoner websites during the summer of 2017 The Riven let ‘Blackbird’ fly on the road. Their tour schedule took them around the UK, Finland and Sweden, opening for a diverse range of acts like the prog metal american legends Fates Warning, the british stoners Elephant Tree and the swedish garage rockers The Dahmers.
In the fall of 2017, The Riven decided they’ve had enough fish n’ chips for a lifetime and to try some swedish meatballs instead. Although they’ll probably never succeed in putting together IKEA furniture they had something else in mind. Now being in the same country as bands such as Graveyard and Horisont The Riven has found the perfect niche for their music. “Coming from Barcelona I must say it does get a bit cold over here however, it’s a great excuse to spend all the time playing music and drinking over-expensive beer!” - Arnau Diaz 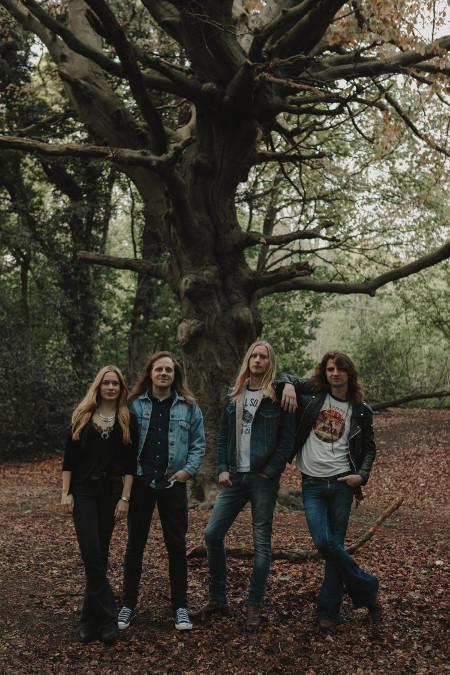 Rate this item
(0 votes)
Tweet
More in this category: « DESIRE OF PAIN FALLUJAH »