New album "Empires Of Mediocracy" out on February 28th!

Black/death unit DunkelNacht is a collaboration between French and Dutch soils; initially conjured by Heimdall as a one-man project. The arrival of bassist Alkhemohr in 2007 turned the venture into a real blackened death metal band. They derive influences from Polish extreme metal, Scandinavian black metal, and even classical and various avantgarde sources. However, DunkelNacht is not shy away from delving too deeply into a different sonic hellscape to create something strange, malevolent and magnificent.
After two lauded albums and two recent EPs, DunkelNacht is ready to bring forth a pinnacle of a recording made with a solid line-up of members. Crafted with new knowledge and experience taught through the years, the 3rd album entitled “Empires of Mediocracy” unveils a solid and smashing wall of sound to the crowd to behold. The opus brings smashing riffs and benevolent melodies to support the constant of interesting compositions. With an intriguing concept and a non-cliché songwriting, DunkelNacht will surprise the daily listeners through thought provoking tunes.
Onto this album’s content, it is written on the concept of total supremacy — may it be by suppression or other relinquishing means, the goal is to control and steer the population of a country or nation. And thus, it is set that there are the alpha and the omega. This album will be an eye opener upon the daily routine of men. It’s a surreal experience, aiming to categorize human beings and to make them believe in some sort of idiocrasy, using the right mechanisms of great importance.
“Empires of Mediocracy” is due for worldwide release on February 28 on CD via Non Serviam Records. The vinyl will come a month later. To support this album, DunkelNacht will embark on “Empires UK Tour 2019” in the mid-February, comprising dates in London, Bristol, Banbury and Swansea. 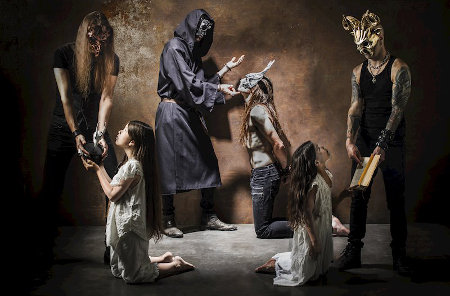