New album "Ategnatos" out in April!

We all wade through archetypes. We all ARE archetypes. Distant echoes of a life both primeval and noble. To embrace these archetypes, to accept them not only as a part of life but as life itself is what some may call enlightenment, some peace of mind. ELUVEITIE call it »Ategnatos«. And by using their longest gap between two Metal albums to gather momentum, they just forged their strongest album around it.
The new album »Ategnatos« will be released on April 5th 2019 via Nuclear Blast.
On an album both mystical and philosophical, ELUVEITIE propel mythology, pagan belief and spirituality into our modern world. “This one almost became something like a socio-critical uncovering work”, says Chrigel, “some kind of a revelation, a doomsday prophecy. Dark and severe in its atmosphere and charisma, and also occult, arcane and elitist.” The album itself is a manifesto, a fast-paced, highly dramatic and embellished work on which today's society sees itself in the mirror of ancient Celtic mythology and knowledge. “The image, of course, is blood-curling”, Chrigel adds with a bitter grin. “At least to those with eyes to see.” Far more that a pessimistic swan song for our world, however, »Ategnatos« holds the cathartic promise of renewal. “Ategnatos is the Gaulish word for ‘reborn’”, Chrigel explains. “To the sharpened mind, it points out the concealed, long forgotten key to change and renewal.” This, naturally, comes at a price. “There's always suffering before bliss. And always darkness before light.”
A work based on archaic archetypes and the ancient concept of renewal, »Ategnatos« unfolds an elemental force to be reckoned with. “These archetypes are still within us. People didn't change that much during the last 3000 years – and men were always just men.” No wonder the album follows a decidedly darker, monumental tone that suits them very well. Of course, ELUVEITIE have long found their very own trademark sound, a sonic adventure often copied but never overcome. With »Ategnatos«, the dedicated nine-piece not only worked with a real string quartet (a premiere!) and granted Fabienne Erni’s sublime mastery of the harp the room it deserved; they also undertook a holistic upgrade resulting in some of the most catchy, most aggressive or most epic tunes the Swiss Metal nobility has ever offered.
Recordings took place in their beloved New Sound Studio with their engineer of choice Tommy Vetterli. “Yet it was radically different as we only had four weeks to record this time around – as compared to the eight weeks we had for ‘Origins’.” By taking mixing duties to the skilled hand of renowned studio wizard Jens Bogren in his Fascination Street Studios in Orebro, Sweden, ELUVEITIE returned to the very spot where they mixed their now legendary »Slania« album more than ten years ago. 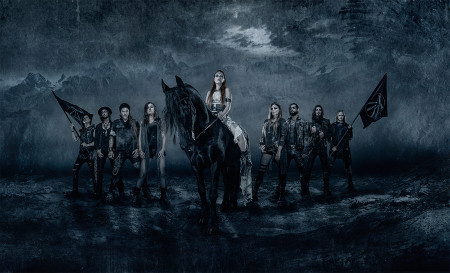