Tampere could be called as one of the most important hubs of creativity in the Finnish alternative and underground musical world, as has been showcased by many artists, from Oranssi Pazuzu to Death Hawks.
Enter Vuono, a quintet of five experienced musicians from – Pauliina Lindell, Petteri Rajanti, Toni Hietamäki, Jussi Lehtivuori and Antero Huttunen – varying backgrounds (Oranssi Pazuzu, Motelli Skronkle, to mention a few) with the idea of approaching pop music from an organic but non-conventional angle.
“I think it’s high time to forget the 3-minute formula for pop songs – it’s a remnant from a time when you couldn’t fit no more than three minutes on the side of a shellac record. Times have changed, and pop music should no longer be constrained by limitations on length or form”, describes the band, “musical ideas dictate everything for us, and all of us contribute to how the music will eventually turn out, regardless of length or musical genre.”
As showcased by debut single Skip Rope, a 11-minute kraut-pop hit, the band are firmly on a path of their own. Lindell’s songs are born of small,  unexpected moments of creativity and then take a life of their own when worked on by the band. Vuono’s music sounds of colorful cosmic visions and faraway galaxies but its feet are firmly planted on warm ground and covered by moss, surrounded by mountain streams and vast forests. 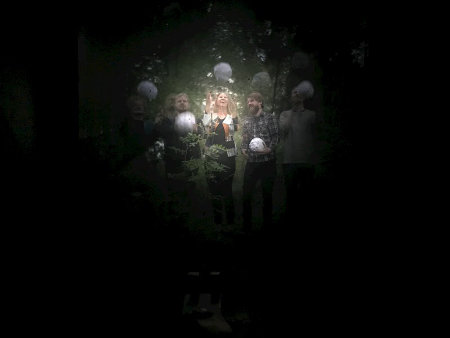 More in this category: « DØDSFALL ELUVEITIE »