Oakland, California-based grunge/punk unit WOLVES IN ARGYLE will release its debut full-length, Dangereux, this January via Incineration Ceremony Recordings.
Produced by alt-rock icon Tad Doyle (Tad, Hog Molly, Brothers Of The Sonic Cloth) and mastered by Jack Endino (Nirvana, Soundgarden, Screaming Trees, Mudhoney) at Doyle’s own Witch Ape Studio, the nine-track Dangereux blurs the lines between punk, grunge, desert rock, and 1990’s Sub Pop alt-rock. A thirty-two-minute sonic white-knuckle ride, recorded “hot,” and reminiscent of the production value of albums such as Nirvana’s Nevermind and Husker Du’s Land Speed Record, with Dangereux the quartet lures its listeners into a film noir-ish sonic and emotional landscape, frothing over with anthemically tuneful songs, boasting shadowy tales of lies, betrayal, and hard-fought enlightenment.
The name WOLVES IN ARGYLE conjures the group’s combined survival instincts to rise beyond their esteemed pedigrees, and to transcend the pain and inner turmoil that initially connected and bonded the four together in the first place. The wording playfully juxtaposes the fierce loyalty of a hunting species within the context of punk rock and ska/rude boy culture, where men and women softened their punk stylings with the whimsical pattern of argyle. Worded together, the phrase slyly conjures the evergreen “wolf in sheep’s clothing” sentiment, perfectly encapsulating the themes of betrayal and deceit lurking within WOLVES IN ARGYLE’s music. Fans of Hot Water Music, Queens Of The Stone Age, and The Damned, pay heed.
Dangereux will be released digitally on January 18th via Incineration Ceremony Recordings.
Three years ago, Dave Holmes (The Oozzies, Shootin’ Lucy, Brother Cain) found himself to be a stranger to himself and to his surroundings. He was in a foreign land, cut off from his friends, his family, and his home. He was alone, emotionally and psychologically gutted – he had followed his heart to dire consequences.
As a singer, songwriter, guitarist, and lifelong punk rocker, Holmes found that the only uplift was writing to process these painfully complex times. The new songs flowing out of him were urgent and transcended established punk rock conventions — they were primal songs, songs of survival. With a clutch of fresh material, and in an impulsive act of self-preservation, he hopped on a plane back to his Bay Area home. Shortly after arriving back, Dave summoned a pack of like-spirited musicians in drummer Steve Moriarty (The Gits, The Pinkos, Evil Stig with Joan Jett), bassist Joe “Fucko” Garcia (Naked Aggression, Strychnine, Trouble Maker), and lead guitarists Josh Phillips (White Trash Debutants, Fire In The Asylum) and Sven Soderlund (Mordred, Laaz Rockit; appears on the record), to form WOLVES IN ARGYLE.
“Writing this music was a huge catalyst to heal from an emotional roller coaster and get my identity back. It was a better outlet than therapy,” Holmes shares.
Together, WOLVES IN ARGYLE and their singular brand of KeroRuak — a term the band coins in reference to a life and sound of realism influenced by literary great Jack Kerouac —  go against the grain in every sense of the phrase from releasing a debut single distributed through industry giants Universal Music, to walking from that option to self-release their next single through CD Baby for self-preservation, to hiding in caves on writing binges, to the partnership with Seattle rock wizard Tad Doyle and Incineration Ceremony Recordings. 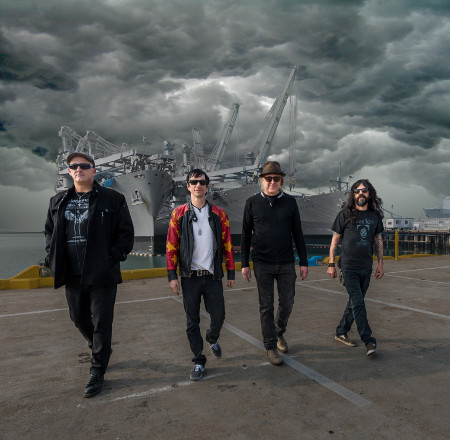