New album "The Goat" out on January 25th!

A fusion of earth-shattering riffs, earworm melodies and anything-goes experimentation, PUPPY’s long-awaited debut album The Goat is testament to their go-it-alone attitude. It’s sonic concoction that’s sure to shock - in a world of modern rock copycats, Puppy sound like nothing else out there - delivered with both a knockout punch and a glowing, silly smile.
The Goat has plenty to offer everyone – from bullet-belted metalheads to shoegazing fuzz lovers, it’s a record that thrives off its kaleidoscopic approach to creativity and the band’s mischievous mentality.
From the guttural stomp of lead single ‘Black Hole’, via the theatrics of ‘Nightwalker’ and ‘World Stands Still' action-movie-montage-ready pomp, no stone is left unturned in Puppy’s desire to push boundaries and – above all – embrace the fun inherent in rock’s former heyday. Jock (vocals,guitars) cites a suitable mish-mash of influences on that mindset – everyone from the aforementioned Black Sabbath and Weezer, to Helmet, Faith No More and Teenage Fanclub got a look in when they were growing up. 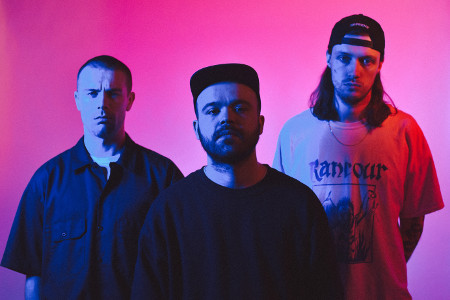 More in this category: « SAOR WOLVES IN ARGYLE »