High Reeper is back with their second release Higher Reeper and they aren’t fucking around. The sound and smell of leather, weed and death now has a hint of Campari and cocaine to color all eight tracks. With the addition of their new drummer Justin Di Pinto, High Reeper has managed to focus their sound and expand it at the same time. The record is darker and heavier than their first offering with guitars that crush you like a tank and lyrics that paint a picture of the world nearing its end. While the sound of Higher Reeper is more focused, at the same time it manages to be more complex and varied. With tracks ranging from ones as heavy as the album opener, “Eternal Leviathan”, to the ethereal ballad “Apocalypse Hymn”, this LP will take you all the way to hell and leave you there to rot. Once again produced, engineered and mixed by bass player Shane Trimble at TTR studios and Delwood Sound and mastered by Mike Tarsia. Solomacello created the incredible cover that captures the mood of the record while giving a nod to classic heavy metal.
Formed in 2016, High Reeper is made up of Zach Thomas, Justin Di Pinto, Andrew Price, Pat Daly and Shane Trimble. Originally started as just a studio band, it rapidly became apparent that these songs were meant to be heard live and loud. The band made their debut in the Philly/DE stoner rock scene in early 2017 with success which was followed up by the recording of their self-titled debut in May. With a sound deeply rooted in modern stoner rock while still giving a nod to the earliest Sabbath records, High Reeper's first offering is driven by pounding rhythms, thick guitars and soaring, screeching vocals. For their second record, the addition of Di Pinto on drums helped focus their sound in an even more powerful direction. The result is a new record with riffs that are even heavier than before that explore new directions, including the ballad “Apocalypse Hymn”. After a successful 2018 European tour that included Desertfest Berlin, High Reeper Will once again tour Europe in 2019 visiting ten countries as well as an appearance at Desertfest London. 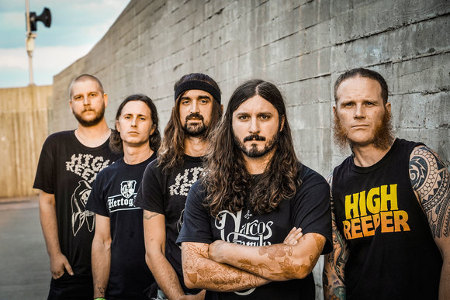