UNCLOUDED PERCEPTION stands for authentic Modern Metal made in Germany that doesn’t only kick ass but also encourages thinking about life. Bone-breaking riffs merged with marrow-rocking vocals and energetic performances are the trademarks of the band. Completed through melodic guitar play, thoughtful lyrics or epic rock ballads, the five guys from Augsburg offer a widespread spectrum of sound to the listener. From Mosh pit storms to neck pain and creeps – those who don’t know Unclouded Perception yet shouldn’t miss a chance.
Although all humans dwell in the same reality, the latter is perceived differently. Their perception is blurred through factors like social state, religion and worldview. As a consequence, everyone defines their own reality so that diverse realities coexist in the same place. The everyday situations which are seen in this environment, are constantly repeated but always experienced in a more or less divergent manner.***
Why “Districts”->
1) It had to be a neutral, cool-sounding but still "eye catching" title
2) In our eyes, the world/humanity is many-faceted, to categorize it in a depiction of this fact, one might say there are several "districts" where different "things" happen. Often separated through each distinct attributes, but then again, coexisting (nearly) on the same spot (***-->3) Like different parts of a town (finance district, everything is shiny, polished and looks modern/fine (ghettos, where everything is messed up, industrial districts, rural districts, etc.) different landscapes,countries or even states/kingdoms  different shapes of mind, different thoughts about the way things do/should work but also AMBIGUITY of these districts (finance district is "good" for economy and people who work there, but "bad" for poor people, etc.), some people think it's good to go to a holy war and kill innocent people along with themselves... others don’t. These people are mad, or rather insane in our eyes, but on the other hand these people think the same way about us.. i.e. NOT going to a holy war is insane... Everyone has their own reality, their own will, their own way of thinking, their own way of judging things. Last but not least COMPLEXITY of these districts/things, why are things the way they are, which factors played a role, what dependencies, influences, relations are there? How and to what extent is everything connected?
3) ***We (UP) do not want to judge these "things" that happen, we do not want to give a statement if something is good or bad or anything else, we just want to make things clear, to reveal an objective truth from the “dust” of lies/money and any other dependencies. We're like beholders/observers who try to see things like they are.. we try to "provide" or rather inspire to achieve an unclouded perception.
The inception of Unclouded Perception took place in Aichach (Germany) June 2009, as a set of five musicians decided to put together their very own interpretation of Metal. Rushing up the local scene, winning contests, getting in the papers on various occasions, their name was slowly but steadily growing. While playing various gigs, they never stopped creating new material, redefining their style from song to song like sharpening a musical sword. Cutting deeper and deeper, their self-released EP “Hitting The Stage” quickly passed the borders of Germany after its release in December 2014. Requests for the physical version from the U.S.A., Ireland, Hungary, Turkey, Australia, Greece, Vietnam etc. showed the band that there was potential in what they were doing, motivating them to do even more. After being contacted by the producer Wahoomi Corvi from Realsound Studio, Italy, plans were made to record a full-length album. Many thoughts and rehearsals later, the band presented its completed songs and concept for the album “Districts”, which eventually led to a record deal with the Italian label Wormholedeath. When all was set, Unclouded not only went to Parma, Italy to give it all on their evolved Modern Metal, but with a mission – Recording a multi-faceted album where daily life, feelings, harsh events and thoughts are transferred to a musical approach. After succeeding their recording-mission, they worked with an international team to ensure that all things concerning the album would fit their message and ideas perfectly. By the end of 2018, “Districts” will finally be released through the label Wormholedeath, giving a big and welcomed musical beating to all the old and new fans to come! 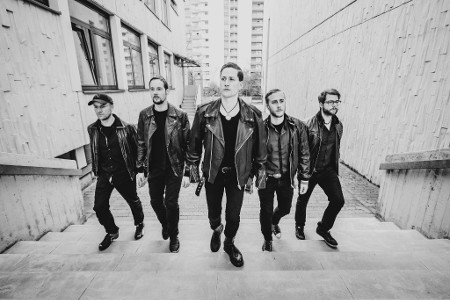