The Dutch Oldschool  heavy metal band Burning will release a brandnew EP under the title “The P.I.D. Files”. The release will be the third week of november 2018.
Burning released their debut album “Nightmares” in 2016. Almost all 1000 copies of that album were sold worldwide and got great reviews in the international media. The last 2 years Burning did many shows supporting bands such as Diamond Head, Tygers Of Pan Tang, Danko Jones to name a few, but also did some successfull headline shows.
In the student magazine of Drake’s University in Iowa appears on the 17th of september 1969 an article under the title “Is Beatle Paul McCartney dead?” As far as we know the first article about the conspiracy theory that Paul McCartney did die in 1966 and was replaced by a look-a-like!  In the years to follow more and more “evidence” popped up,  that  the “real”Paul did die. Bandmate George Harrison gave him the nickname “Faul” and the other Beatle Ringo Starr was believed to be said in an article that he really died and that he would not carry the secret with him into his grave.  “When Paul died, we all panicked! We didn’t know what to do, and Brian Epstein, our manager, suggested that we hire Billy Shears as a temporary solution” was one of his comments. (Shears was the winner of a Paul McCartney look-a- like contest.)
True or not true, Burning thought it was a great idea to write a concept – record about this conspiracy theory,  and asked once more the famous dutch thriller author Bronja Hoffschlag to write some lyrics for the EP. Bronja and Burning ended up with 4 new tracks. In 2017 Bronja was the author of the roman “P.I.D.”. A book also about the alleged death of Paul McCartney. The artist Marion van der Laan painted the artwork for the EP cover. 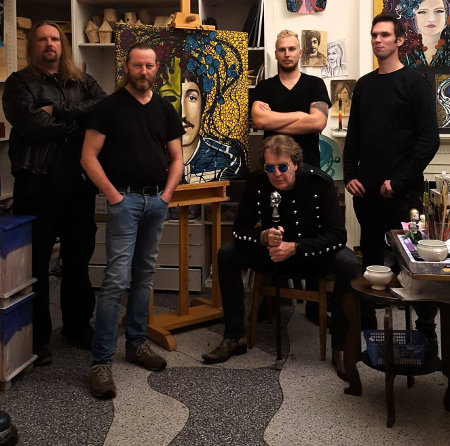