New album "Architects Of Evil" out on November 16th!

Αfter a short period of silence, the cult of SABOTER is back! SABOTER’s second album, an aural horror of merciless sinister Metal under the title “Architects of Evil”, is going to be released on November 16th 2018 by No Remorse Records.
The script of the cult and the sinister rites are unveiled and spread like a plague upon the world. The music of “Architects of Evil” is a blend of pure Heavy Metal with epic, power and tech thrash elements. It will fit in the taste of a variety of Metal fans that worship bands from MANOWAR to JUDAS PRIEST, RAM and beyond.
SABOTER started their journey in 2014 in Athens, Greece, and released a self-titled EP in 2015. One year later, the first full-length album “Mankind Is Damned” was published and they were also included in a Metal Hammer’s magazine compilation with the hottest bands of the period. With the strongest possible line-up, including ex-members of OVERCAST and current members of RAPTURE and THOU ART LORD, expect nothing less than merciless Heavy Metal!
Live dates will be scheduled shortly and every show will include a sinister and epic performance, since the cult works with passion and is hungry to hit the stages. 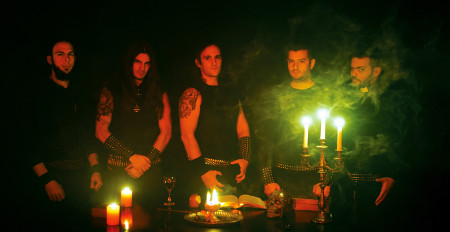