Innovators don’t simply accept the status quo, they don’t follow trends, and they don’t blindly bow to expectations. Instead, they challenge themselves and their audiences to pierce the surface, rip back the layers, and unearth truth in its purest form. The process isn’t pretty, but the end result is...
Since assuming consciousness in 2011 on their full-length debut Burn This World, The Browning have diligently and decidedly expanded the boundaries of heavy music through a seamless automation of industrial, electronic, rock, and metal styles, and video game score-style expanse. 2013’s Hypernova represented a high watermark for the Kansas City, MO quartet–Jonny McBee [vocals, electronics], Brian Moore [guitar], Collin Woroniak [bass], and Cody Stewart [drums]. Named “Album of the Week” by Revolver, it yielded the signature anthem “Bloodlust,” which clocked over 2.6 million YouTube views and nearly 2 million Spotify streams. In 2016, they reached another level with Isolation, earning acclaim from outlets such as New Noise Magazine and generating millions of views between “Dragon” and “Disconnect.” Relentless touring saw them hit the road with the likes of Chelsea Grin, We Came As Romans, Alesana, Fear Factory, Static-X, and more.
However, the group’s fourth full-length album, Geist [Spinefarm Records], fully represents the actualization of the sound McBee envisioned nearly a decade before.
“My end goal for The Browning is to be industrial-electronic-rock-metal,” he explains. “For this new album, I knew there needed to be a massive change not just musically for listeners, but for myself. That change had to come from the vocals. I’ve been working on finding the right voice for three years that’s powerful and melodic, but still extremely heavy and emotional. It was a long process, and I documented most of it live on my Twitch channel.”
As McBee faced myriad personal trials and tribulations throughout 2017, he simultaneously wrote countless songs and livestreamed the creative process on Twitch. Upwards of 100 users might tune in daily to witness his catharsis in real-time. Six of those songs would land on Geist.
However, he quit streaming in order to get really personal.
“Structurally, the base of half the album was written on stream,” he says. “Since I was writing in front of a live audience, I was giving them what I thought The Browning fans would want to hear–breakdowns, fast synths, and techno. However, I wanted to incorporate different elements. I wrote the rest in private, so I could really focus.”
Intensely focusing, he spent nearly six months penning lyrics, sharpening his voice in the process. That period yielded a thematic thread that belies a much larger vision.
“A lot of the lyrics are about someone accepting their fate no matter what that fate might be,” he admits. “What impact do we have on each other and what impact do we have on the world? You accept whatever is going to happen to you in the end. There’s nothing you can do about it, whether it’s your influence or that of some deity or god. This was by far the hardest lyric process for me, because I was going through so much personal crap. That consumed me every second of every single day. I didn’t want to write about those things.”
The Browning introduced this opus with the brutal bloodletting of “Carnage.” A chug of neck-snapping guitars, shuddering electronics, raucous rapping, and guttural screams, it stands out as “the most aggressive song on here.” Lyrically, it nods to a favorite anime entitled One Punch Man about a hero who can kill any villain with one punch, but suffers existential crisis.
“Even though he saves the world, he feels nothing inside,” explains McBee. “Other heroes have better names or look more attractive. He shows up, vanquishes the bad guy, and someone else takes credit. It’s about others claiming your success as their own and having too much power that it makes life depressing.”
The follow-up single “Final Breath” thrives on kinetic energy before exploding with an atomically catchy hook that highlights his vocal range.
“I imagine standing within a mile of a nuke exploding and seeing the fire and shockwave come at me,” he says. “I have my lungs and arms open and take in a big final breath until the light reaches me. I’ll take my last breath even if it’s with fire. It references the thought of the planet being angry and destroying everything. When there’s nothing here, the planet will be very happy. It ties into the overall theme of accepting what we can’t change.”
Elsewhere, “Beyond Stone” tempers synth wave textures with crushing grooves and infectious melodies. “Skybreaker” marks the grandest evolution, bordering on arena-ready ambition.
“That song pushes us beyond the scene,” he goes on. “It talks about how failure isn’t the end of everything and how success isn’t the end of everything as well.  I’ve failed. I’ve succeeded, but I’ll never stop trying. Sometimes, I feel like a failure, but I took a solo project I started at 15 and have lived off of it professionally for my entire adult life. That’s meaningful to me.”
In the end, The Browning don’t just pave their own path with Geist; they bulldoze it for others to follow.
“I want people to appreciate the fact we’re trying to write something that hasn’t been written before as far as genre-meshing goes,” McBee leaves off. “It took a long time and a lot of hell, but I feel like we got closer than ever.” 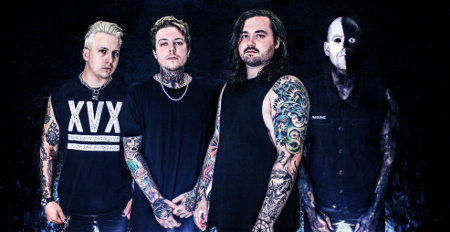