New album "Masters Of The Multiverse" out on October 12th!

Vienna 2007. The Dragonslayer Project caused an uproar on the Austrian scene. What began simply as a project, quickly became an established band, playing numerous successful shows. Even established bands such as Axxis, Sonata Arctica, Serenity, Powerwolf and Paul Di'Anno relied on the band as an excellent support act. During the recording sessions, the band changed its name to the simpler DRAGONY and signed a contract with Limb Music in 2011. Six years later DRAGONY are now presenting their third studio album entitled "Masters Of The Multiverse". Ten brand new symphonic metal hammers which cover the entire breadth of the genre.
The ten new songs are nicely balanced and cover the entire spectrum from stamping riff monsters to high speed bombers to epic ballads. Not only does Sabaton guitarist Tommy Johansson feature on the album, but one is also treated to the vocals of Van Canto singer Ross Thompson and the German vocalist Nora Bendzko. Between hammering riffs and tempered but complex parts, catchy melodies and substantial choruses play a significant role in the overall sound of the new album. "Defenders" is a particularly good example. The somewhat slower "The Iron Price" has excellent solo parts but is based more on an epic platform. The fast "Grey Wardens" is one of the core tracks of the album. The cover version of Stan Bush's "The Touch" absolutely throbs. The constant presence of keyboards gives the music a superb volume and, at the same time, a very high melodic content. The same applies to the regular presence of the multi-vocal choral parts. The sound is crystal clear and is rich in detail. As a result, the album, mastered in the Finnvox Studios, promises great listening pleasure.
A lavish video clip was filmed to "If It Bleeds We Can Kill It", whilst lyric videos are being released to "Flame Of Tar Valon" and "Defender". Autumn 2018 will bring live performances in the Czech Republic (Masters Of Rock Festival) as well as at the Polish City Of Power Festival, shows with Battle Beast and finally a European tour with Serenity und Visions Of Atlantis. The mercury in DRAGONY's barometer has risen to bursting point and "Masters Of The Multiverse" is the latest reason why. 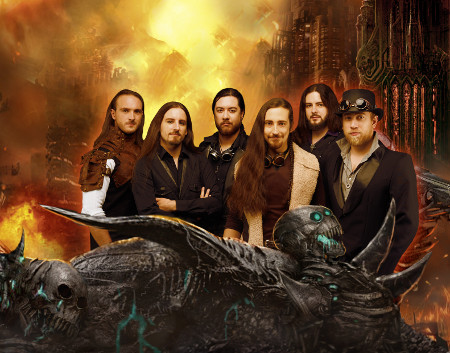