New album "The Room" out on November 2nd!

Terror From Hell Records is proud to announce the second full-length of Italian Doom Metal band NIGHT GAUNT!
"The Room" features six tracks made up of monolithic riffs coupled with heavily pounding drumming, deeply throbbing bass and epic-styled haunting vocals. As on their previous releases the general atmosphere is rather dark with a slight hint of melancholy, and it surely bear a disheartening feeling of anxiety, just as a flying nightgaunt (from Lovecraft's narrative efforts) was chasing you. The album was recorded, mixed and mastered at Devil’s Mark Studio, Rome (Demonomancy, Destroyer666...) in summer 2017. The front cover was created by Nicola Samorì (2013, Oil on Copper).
Italy has always had a strong tradition when it comes to Doom: Lurking in Rome's darkest spots since 2013, NIGHT GAUNT started their path in some of the most gloomy and frightful musical territory. So far NIGHT GAUNT has released a self-titled full-length (May 2014) and an EP called "Jupiter’s Fall" ( August 2016). The band has played almost everywhere in Italy, sharing the stage with acts like Grave Miasma, Mystifier, Black Oath, Satan’s Satyrs, Caronte, Demonomancy. They took part at Hammer Of Doom 2016 (with Saint Vitus, Samael, Primordial, Lord Vicar, The Skull, Antimatter etc..) and Black Forest Fest 2017 (with Noothgrush, Spectral Voice and Cryptic Brood), and followed Cauchemar (in 2016) and Abysmal Grief (in 2015) on their Italian mini tours. 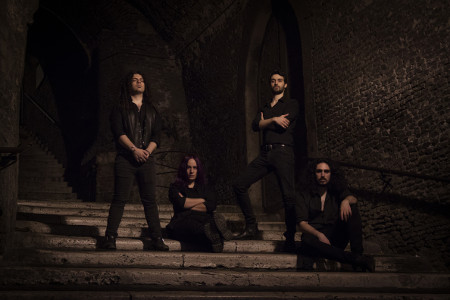