New album "The Golden Moth" out on September 21st!

Dark Sarah is a Finnish cinematic metal band led by classically trained singer/songwriter Heidi Parviainen. After parting ways with Amberian Dawn in late 2012, she started to build up a new project called Dark Sarah. Dark Sarah´s music combines metal, film music and theatrical elements. The albums are concept albums telling a continuing story of a young woman called Sarah and her evil half - Dark Sarah and a mystical journey through three worlds. All the three albums have been crowdfunded by the fans on Indiegogo.
Dark Sarah´s first trilogue - The Chronicles
PART 1 - Middle World  The debut album called "Behind the Black Veil" was released in Europe and North America in 2015 through Inner Wound Recordings. The first published song called "Save Me" introduces the listener to the main character Sarah, a young woman left at the altar by her husband. When she is on the verge of breaking down, something wakes up inside of her and she changes into another person; her meaner half, Dark Sarah. The album leads you through the psychological adventure of Sarah, who is hovering between her two personalities. Sarah´s thoughts are at best depicted in the dialogues (duets) with the guests - Fate: Manuela Kraller (ex Xandria), Queen of No Good: Inga Scharf (Van Canto) and Moon: Tony Kakko (Sonata Arctica).
PART 2 - The Underworld  Dark Sarah released the second album called "The Puzzle" in November 2016 in Europe and North America  through Inner Wound Recordings. "The Puzzle" tells a story of Dark Sarah who has been sent to Underworld, an island where the banished souls live. To get off the island she needs to solve the puzzle and find three keys. On the island she meets different characters, roles sang by the guests:   Fate: Manuela Kraller (ex Xandria),  Evil Siren Mermaid: Charlotte Wessels ( Delain) and The Dragon: JP Leppäluoto (Charon, Northern Kings).
PART 3 - The Upper World  The new third album called "The Golden Moth" is the last part of "The Chronicles" - trilogue. JP Leppäluoto (The Dragon) has joined Dark Sarah´s official lineup for the album. The story tells about Dark Sarah leaving the Underworld with the Iron Eagles and entering the Upper World, a deserted waste land where the gods rule. The Dragon has sneaked into the new world by following Dark Sarah. First Dark Sarah thinks he wants to harm her, but soon they team up. Together they try to find their way to the gods that live on an island floating upon the desert.
In the roles of The gods you will hear The Iron Mask: Zuberoa Aznarez (Diabulus In Musica), White Beard: Marco Hietala (Nightwish) and Netta Skog (ex. Ensiferum) as Fortune Teller
Production, orchestrations and mixing by: Mikko.P.Mustonen - Pathos Music [Delain, Sonata Arctica, Ensiferum]
Mastered by: Henka Niemistö – Chartmakers [Volbeat, Sonata Arctica, Korpiklaani]
Artwork by: Jan Yrlund, Darkgrove Design [Apocalyptica, Ensiferum, Sirenia] 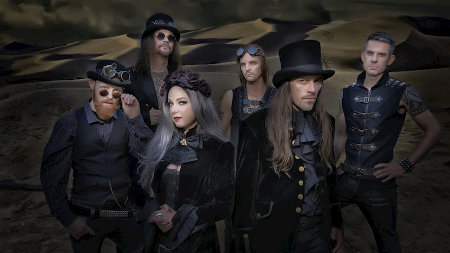 More in this category: « SECOND SUN THE OUTSIDE »