"The Place" debut album out!

Firmline Network is proud to announce that alternative melodic metal one-man band To Find Solace has released his debut album "The Place".
"The Place" has been written by To Find Solace, mixed and mastered by Parallel Studio.
To Find Solace is an alternative melodic one-man band from Italy, created early 2017 by Mattia Trovato. Coming from a melodic hardcore and emotional-driven musical background, the artist’s first three singles, “Never/smile”, “The Past” and “Grave Stakes”, are a raw and deep exploration of Mattia’s relationship with love and his difficulties in sharing and showing it to the loved ones. They are open-heart stories examining the acknowledgement of guilt, the challenge of communication; unwanted break ups and their related mental effects. This all was possible also thanks to the precious collaboration of Teo, raw vocals of Outgone and dearest friend of the artist. As 2017 goes on, Mattia keeps releasing many stand-alone singles such as “Leaving”, “Frenemy”, “Drive Me Out” and - the latest - “Heartsease”, which is an actual anticipation of what would come next. These singles are as deeply personal as the previous ones, but instead of focusing on love and its associated struggles, the artist tries to address other subjects, such as the importance of friendship, brotherhood, payback and self-esteem in a context of falsehood and hypocrisy surrounding him. As 2018 starts, To Find Solace announces the anticipated release of the debut album, “The Place”. This is presented as a musical path through the artist’s toughest year of his life, marked by separations, hiraeth, stress, vacillation, pent-up anger and where love - by contrast - is the only shelter, the only chance for him to go on. 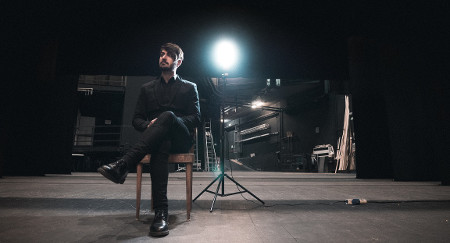