New album "Higher And Higher" out on April 27th!

With members from bands like Constancia, The Poodles, Token, Narnia and Essence of Sorrow, and with guest stars Nina Söderquist (Bjorn Skifs/Badrock, Champions of Rock a.o.), Janne Stark (Grand Design, Mountain of Power a.o.), and Tåve Wanning (The Voice, Adrenaline Rush, Peaches), new melodic hard rockers Heartwind may come across as one of those one off band projects, but nothing could be more far from the truth. Heartwind is the story of two old friends, with a common love for classical melodic hard rock and AOR, that after fifteen years of friendship started to write the album they always had wanted to listen to themselves. Over a meal in downtown Stockholm, guitar player and songwriter Goran Engvall (former with Hitworks) and progressive/melodic keyboard player and fellow songwriter Mikael Rosengren (Constancia, Token, Scudiero), laid down the vision for what was yet to come. 15 original songs and 12 months later, Mikael started to pull some strings from his many fellow musicians in the Swedish hard rock scene since 20 years back. The two songwriters were amazed with the positive response they got on their first demos, from hard rock industry people & fans. It became evident that they were going to be able to attract some great talent to the album and the band. Believing in the importance of fellowship and a strong people fit when starting a band, Mikael and Göran started to dig in closest ground: Drummer Peter TrumPeter Svensson (Constancia, Faith) and singer Germán Pascual (Narnia, Dj Mendez, Essence of Sorrow), happily joined the band, and two key pieces of the puzzle came into place. With Peter and Germán onboard, the band knew they had both a powerful backbone and a phenomenal front man in place!
Germán invited his old friends, and former band mates, guitar virtuoso Martin Hall (Germán Pascual band) and bass wizard Germain Leth (The Poodles, Watchmen) to join the band and magic was about to happen. When also the very well respected Fredrik Folkare (Unleashed, Firespawn, Eclipse, Scudiero a.o.), accepted to team up to produce and mix, the band knew they had something special going. Fredrik’s contribution also as a musician on the album (guitar & bass) cannot be underestimated.
With classical albums like Hysteria (Def Leppard), 1987 (Whitesnake) and Escape (Journey) serving as inspiration, the intention from the band has been to get every single track to stand on its own two feet! Timeless melodic hard rock with a modern but still genuine sound!
After publishing a short teaser on Youtube, just before X-mas 2017, Heartwind stood ready as a band and was offered record deals by no less than three (!) different labels. Heartwind washappy to sign with AOR Heaven in early January and making an old dream come true.
The album is mixed and produced by Fredrik Folkare, Chrome Studios, and mastered by Erik Mårtensson, Blowout Productions (Eclipse, Ammunition, WET a.o).
Heartwind is ready to rock the world! 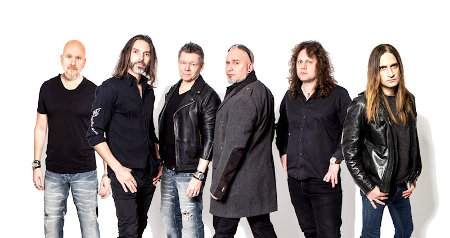 More in this category: « ASCENDANT SOLSTICE »