New album "A Thousand Echoes" out on April 20th!

Work on this album began in late 2014 and completed in 2017. The album was tracked and mixed at ‘Playback Lounge’ studios in Dubai and Mastered at Studio Fredman in Sweden.
Consisting of 8 songs (not including the intro track), ‘A Thousand Echoes’ is a heavy metal tour de force of real human stories steeped in war, struggle, tragedy and hope.
Inspired by the experiences of the members of the band and based on true stories – this album has a foundation built on genuine emotion. 3 of the 5 members of Ascendant grew up in Syria, which is now undergoing a bloody civil war. Each one of them has experienced loss and tragedy; they have seen firsthand the horrible effects of war on innocent people. With music being their method of expression, and with the events in their home country on their minds, multiple songs on this album deal with the unseen human victims of wars.
This album also features several guest contributors. Brothers - Simon and Elias Abou Assali are featured on the song ‘Land of a Thousand Echoes’ which is about people who risk their lives brave the dangerous sea crossing to escape their war-torn homes and find refuge someplace safer. Simon and Elias are survivors who made just such a crossing a few years ago.
The album features the inimitable Lindsay Schoolcraft from the legendary Cradle of Filth on the track ‘Morning Light’.
Hadi Sarieddine (Solo & Benevolent, UAE) lent his considerable talents in the Intro Arrangements for ‘Twilight of Eden’ and ‘Fog of War’. 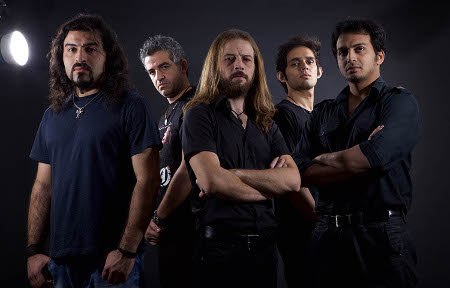