To release upgraded version of "Dominions Of Our Deceitful Beliefs"!

Brasov, Romania based Death Metal quartet CodeRed announce the re-release of their Dominions of Our Deceitful Beliefs album in remastered, improved version including a bonus track, for the 26th of February via Loud Rage Music. 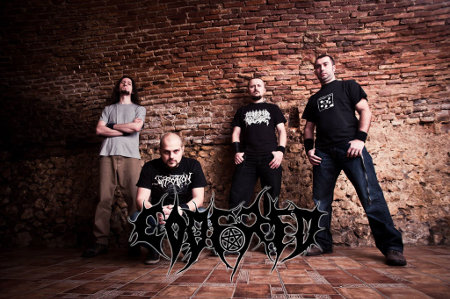 Here’s what the band had to say on this material:
“We worked very hard on this project. Every passage found its perfect spot in the song, nothing was chosen randomly. We chose quality instead of quantity and in the end it came out something I’m personally very proud of. Each member of the band had a valuable contribution to the final product, there were 4 different and complementary personalities who mixed each other to perfection.” Armand Niculescu
“When we started working at “Dominions of Our Deceitful Beliefs” we didn’t knew where the musical orientation will go to. I think that the mixture of ideas, ideas of mine, Armand and Septimiu was special. Also we decided back then that we needed a new bass player, so we welcomed Ioan “John” Campian as a permanent member and I think he managed to do a very good job in the direction we wanted to go to. For fans of Nile, Morbid Angel, Deicide, Death or Pestilence I think it will be a nice surprise, especially now in the new remastered version with a bonus track.” Andrei Calmuc
http://www.codered.ro/
http://www.facebook.com/coderedro
http://www.youtube.com/coderedro

More in this category: « SPECTRAL RITES OF THE DERINGOLADE »