Debut album, "The Light In The Dark", out now!

The Houston, Texas based female-fronted progressive / power metal band are making their debut album "The Light In The Dark" available as a promotional media download in order to secure world-wide reviews and radio airplay. The album was released on October 13, 2017 via Sleaszy Rider Records (Greece).
"Man is least himself when he talks in his own person. Give him a mask, and he will tell you the truth." - Oscar Wilde
Masqued is a band like no other. Located in Houston, Texas, they specialize in uncompromising heavy metal, with songs featuring complex arrangements, deep lyrical themes, and hooks that get stuck in your head. With influences ranging from 70s rock to bay area thrash, jazz, progressive metal, and everything in between, Masqued seeks to push the boundaries of modern-day metal while still appealing to fans of music from many different genres. The combination of technical wizardry, soulful, soaring vocals, and expertly crafted songs results in a sound that is truly unique in today's music scene. 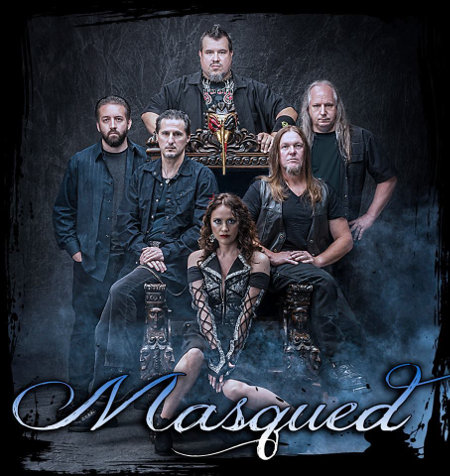 The band was formed in 2014 by guitarist Eric Halpern (Helstar, Leatherwolf), bassist Shane Dubose, and keyboardist Adam Rawlings out of the ashes of local Houston legends Z-lot-Z. Looking for a more aggressive, modern sound, they recruited drummer Jon Allen (Testament / Sadus) and guitarist Drew Creel (Meyvn), and after much searching and many auditions found vocalist Steffany Johnston to complete the group. The chemistry was instant, and soon the band was winning fans all over Texas with its electric live performances.
Masqued’s debut album, “The Light in the Dark”, was produced by Juan Urteaga (Testament / Machine Head / Vicious Rumors) with additional tracking by Brian Baker (Toadies / Garbage). The songs range in style from blistering up-tempo thrash to brooding, melancholy hymns, with something for every fan of metal and good music in general.The album was recently released through Sleazy Rider Records (Greece) and has been receiving rave reviews across the globe.

More in this category: « STRANGER CRUENTATOR »