New album “Fragments Of A Ruined Mind” out on November 24th!

The quintet from Athens led by the charismatic frontman Billy Vass, delivers a solid, straight, simple & pure Heavy Metal album where everything sounds so familiar yet so inspired and powerful. On a musical background which combined the straight metal influences of Iced Earth & Black Sabbath and the lyricism of Sanctuary and Fates Warning , Billy Vass sings the story of the main character of Strahd: a story of betrayal, love, loyalty, death and in the end...the eternal damnation. 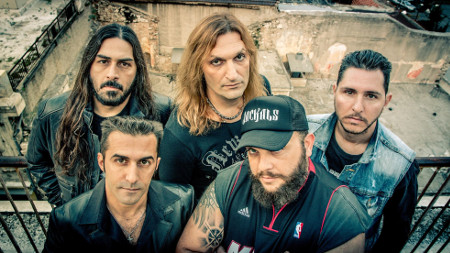 Terra Incωgnita’s second album is a milestone both for them and SYMMETRIC RECORDS and producer Bob Katsionis states:  “I loved their music from the very first note. I met them at a festival where they grabbed my attention with both their heaviness and their sensitivity. It was a very easy and fun to make album and I think it features something that it’s missing a lot these days: the ability to play for yourself and not to surprise anyone.Really glad I’m debuting my label with them!”
Recorded and Mixed by Bob Katsionis at Sound Symmetry Studio, Athens,GR.
Mastered by Nassos Nomikos at VU Productions
http://www.terraincwgnita.com/
https://www.facebook.com/terraincognitagr

More in this category: « THE REED EFFECT ARMORTURA »