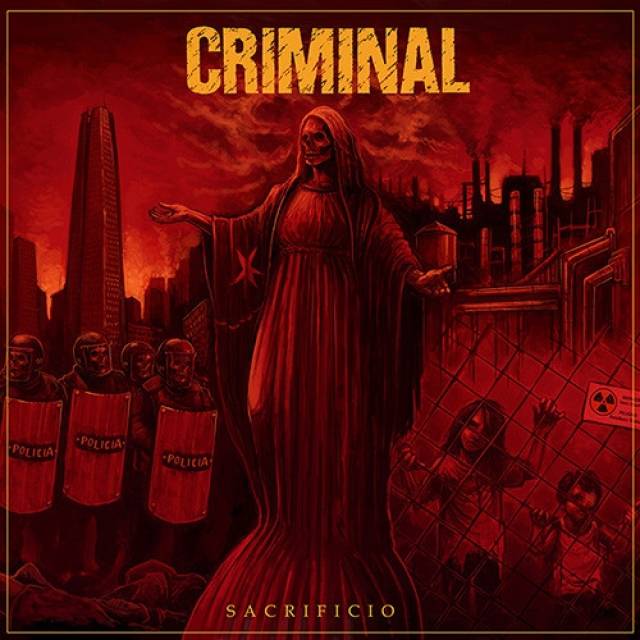 Sacrificio is Criminal's ninth full-length studio album: a twelve-track bludgeoning that harks back to their roots - both literally and metaphorically. Whilst writing for Sacrificio, Criminal's home country of Chile saw a social uprising that has impacted the lives of Chileans in immeasurable ways. Protests against corruption, inequality and the poor standard of living saw citizens take to the streets to make themselves heard. This civil action and vehement anger seeped into the creative process of the four members of Criminal - three of them being Chilean. Although there is a deep personal connection to the lyrical content, the events unfold from the perspective of a spectator - albeit one who has also experienced tyrannical leadership and witnessed the divide between ordinary citizens and the social elite.
Chilean culture weaves its way into the album in other ways too; though suitably heavy, there's a percussive element to the sound of Sacrificio that reveals its Latin American roots. Coupled with an unapologetic nod to the 90s in terms of both composition and production, this album sees Criminal finding their groove in more ways than one. The resulting sound is celebratory, rhythmic, organic, and captures everything that was glorious about the flourishing extreme metal scene in the 1990s.
For a band that originally formed out of the ashes of 80's death metal legends Pentagram Chile, the album highlights the benefits of embracing the band's origins; writing and recording took place in Chile for the first time since the 1990s. Criminal continues to prove that South America can create powerful death metal on its own terms. For Sacrificio, much of the material was written in the old-fashioned way - jamming in a sweaty rehearsal room, refining as they went. The old school vibe is further enhanced by the natural sounding production of Seba Puente, which adds to the immediacy and live feel found throughout Sacrificio.
The past 30 years have seen twists and turns in the Criminal tale, but Sacrificio finds them sounding more compelling than ever. The sole original member, vocalist/guitarist Anton Reisenegger (Brujeria, Lock Up, Pentagram Chile), allows plenty of room for the newer and younger members of the band - Danilo Estrella (drums), Danny Biggin (bass), Sergio Klein (guitar) - to add their personal touches to the band's missives.
Read on to see what other artists have to say about Sacrificio!
"Fucking awesome, the best album I've heard in a long time. Amazing production, everything sounds natural, not over compressed like most productions nowadays. Amazing guitars, drums, vocal tones - some over the top guitar leads!" - Moyses Kolesne (Krisiun)
"Criminal is back! Be ready for a non-stop, no bullshit, full frontal assault to your senses! As a long-time fan, I can confidently say that this is some of Anton & company's best work to date!" - David McGraw (Cattle Decapitation)
"Being a long-time fan of the band, I was already stoked to hear the new material, as always, expecting to hear great riffs and aggressive songs - but I was also pleasantly surprised to hear the band expand their sound into new violent territories, without losing the energy and feeling of their earlier albums!!! Tracks like 'Caged' and 'Sistema Criminal' are perfect examples of how Criminal keeps delivering amazing METAL!!!" - Dan Gonzalez (Possessed / Gruesome) 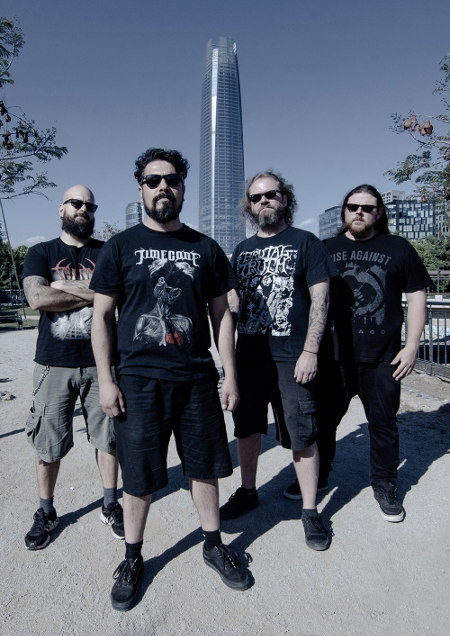